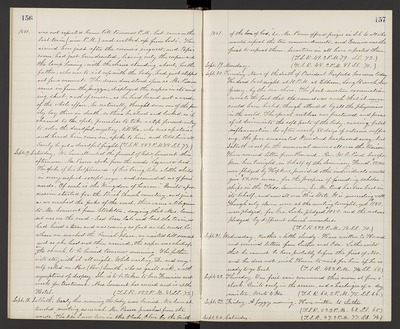 1881. was not expected till tomorrow P.M. but came on the last train (nine P.M.) and walked up from Lodi. He arrived here just after the coroner's inquest, and Papa's room had just been deserted, leaving only the corpse and the lamp burning, with the chairs standing about, for the father, who was to sit up with the body, had just stepped out for a moment. The room door stood open as Mr. Pascoe came in from the piazza, displayed the corpse in its winding sheet, and of course, as he had heard not a word of the whole affair, he naturally thought some one of the family lay there in death, so there he stood and looked, as if chained to the spot, powerless to take a step forward or try to solve the dreadful mystery, till Dr. who was upstairs and heard him come in, spoke to him and told him all. Surely he got a dreadful fright. (T.S.R. 58. 2 P.M. 88. S.S. 77.)

Sept. 17. Saturday. We have attended the funeral of Edw. Somerset this afternoon. Mr. Pascoe spoke from the words, "Lazarus is dead." He spoke of his helplessness - of his being like a little child in every respect except size - and reminded us of Jesus words, "Of such is the kingdom of heaven." Quite a procession started for the Birch Church cemetery, and just as we reached the forks of the road, there came a telegram to Mr. Somerset from Stockton, saying that Mrs. Somerset was on the road - had been late and lost the train, so had hired a team and was coming as fast as she could. So when we reached the burial-place, we waited till sunset and as she had not then arrived, the corpse was shut up in the church, to be buried tomorrow morning. The father will stay with it all night. While waiting, Dr. and myself called on Mrs. (Rev.) Smith, who is quite sick, with symptoms of dropsy. She is to be taken to San Francisco next week for treatment. Mrs. Somerset has arrived and is at the Hotel. (T.S.R. 55. 2 P.M. 81. S.S. 73.)

Sept. 18. Sabbath. Early this morning the body was buried. We have attended meeting as usual. Mr. Pascoe preached from the words, "The life I now live in the flesh, I live by the faith

Sept. 20. Tuesday. News of the death of President Garfield has come today. He died last night at 10 P.M. at Elberon, Long Branch, New Jersey, by the sea-shore. The post mortem examination reveals the fact that the wound was such that it never could have healed, though attended by all the physicians in the world. The spinal vertebrae was fractured and pieces of it driven into the soft parts of the body, causing fatal inflammation. So after nearly 80 days of extreme suffering, the poor emaciated President has passed away. Next Sabbath is set for the memorial services all over the Union. Have received letter from Howard. Rev. W.C. Pond has spoken here tonight, in behalf of the Seminary Fund. $50,000 was pledged by Hopkins, provided other individuals would give $50,000 more, for the purpose of founding scholarships in the Theo. Seminary. So Mr. Pond has been East in its behalf, and now all over this State. It is succeeding well. Though only eleven were at the meeting tonight, yet $1180. were pledge, for Geo. Locke pledged $1050. and the rest was pledged by different church members. (T.S.R. 50. 2 P.M. 78. S.S. 70.)

Sept. 21. Wednesday. Weather a little cloudy. Have written to Howard and received letters from Luther and Ida. Luther writes that he cannot be here probably before the first of Nov. and he does not wish Horace to wait for him if he is ready to go East. (T.S.R. 48. 2 P.M. 74. S.S. 68.)