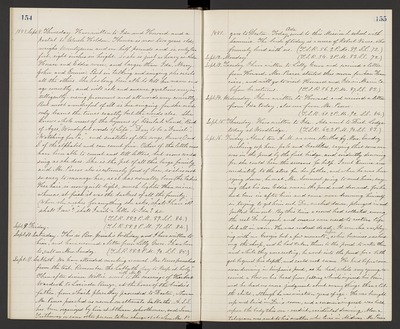 1881. Sept. 8. Thursday. Have written to Ida and Howard and a postal to Uncle Holden. Theresa is now two years old, weighs twentyseven and one-half pounds and is only two feet, eight inches in height. So she is just as heavy as Ada. Horace and Eddie were, and larger than Ida, Mary, John and Eunice. But in talking and singing she excels all the others. She has long been able to tell her name and age correctly, and will ask and answer questions very intelligently using pronouns and all words very correctly. But most wonderful of all is her singing, for she not only learns the tunes exactly but the words also. She knows whole verses of the hymns of "Bentah Land," Rock of Ages, "Wonderful words of Life", "Dare to be a Daniel", "Watching for Pa," and snatches of other songs, knows O and S of the alphabet and can count five. Others of the little ones have been able to count and tell letters, but none could sing as she does. She is the pet of all this large family and Mr. Pascoe also is extremely fond of her, so it is not so easy to manage her, as it has usually been the babies. Her hair is now quite light, much lighter than mine, whereas, at first it was the darkest of all the family. When she wishes for anything she asks, "shall I have it?" "shall I sew?" "shall I write a letter to Ida?" &.c. (T.S.R. 58. 2 P.M. 89. S.S. 84.)

Sept. 11. Sabbath. We have attended meeting as usual. Mr. Pascoe preached from the text, "Remember the Sabbath day to keep it holy." Then after dinner Willie went with Mr. P. to the marriage of Hubert Wardrobe to Lucinda Breeze, at the house of the bride's father, from which place they proceeded to Dexter, where Mr. Pascoe preached as usual on alternate Sabbaths. A.S.S. has been organized by him at Athearn schoolhouse, and Sam Tretheway or some other person takes charge of it when Mr. P.

Sept. 16. Friday. About ten A.M. we were startled by Mrs. Sandoz rushing up here pale and breathless, saying that someone was in the pond by the first bridge, and evidently drowning for she could hear the screams for help. I sent Eunice immediately to the store for her father, and when he was hurrying down, he met, Mr. Somerset going to meet him, saying that his son Eddie was in the pond and drowned, for he had been in after him and came near drowning himself in trying to get him out. Dr. rushed down, plunged in and pulled him out. By this time a crowd had collected, among the rest Dr. Sargent, and means were used to restore life but all in vain. He was indeed dead. It seems he was playing with our Georgie but a few moments before as his business was herding the sheep, and he had taken them to the pond to water them and while they were resting, he went into the pond for a bath got beyond his depth, and could not swim. He had before came near drowning in Simpson's pond, as he had, while very young, received a blow on his head from falling which injured his brain, and he had no more judgment about many things than a little child, although he was nineteen years of age. He was brought up and laid in Dr.'s room. and a coroner's inquest was held upon the body this eve - verdict, accidental drowning. Also a telegram was sent to his another who lives in Midway. Mr. Pascoe