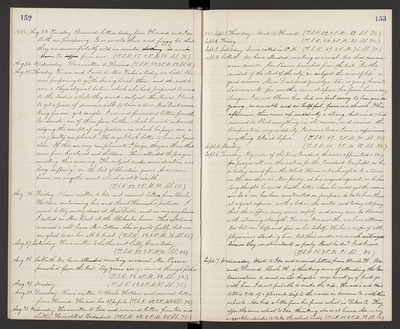 Aug. 25. Thursday. Horace and I rode to Mrs. Tabor's today in Lodi! She was preparing to go to the Sewing Circle there, and she read to me a Physiological lecture which she had prepared to read to the ladies while they sewed - subject - the Nerves. I tried to get a piece of summer silk to trim a dress Miss Dart is making for me - got samples. I received forwarded letters from the Yo-Semite - one of them from Luther, which he wrote acknowledging the receipt of my picture - in which he pays me a very pretty compliment. He says I look better to him as I grow older. If there are any compliments I prize, they are those that come from husband and children. Have attended the prayer meeting this evening. The subject under consideration was "long-suffering" - in the list of Christian graces. As we came home, we saw the comet which is still visible. (T.S.R. 52. 2 P.M. 80. S.S. 65.)

Aug. 26. Friday. I have written to Ida and received letter from Uncle Holden containing his and Aunt Hannah's pictures. I went to try on my dress at Miss Dart's, and on my way home I called on Mrs. Bost at the Blakeslee house. This afternoon received a call from Mrs. Cotton. She is quite feeble, but we are glad to see her able to be out. (T.S.R. 54. 2 P.M. 76. S.S. 66.)

Sept. 4. Sabbath. We have attended meeting as usual. We had communion service. Mr. Pascoe preached from the text, "In the midst of the street of the city," &.c. subject "the river of life" - a good sermon. Miss Dart said goodbye. She is going home to Sacramento - her mother cannot spare her from home any longer. I do not blame her but we feel sorry to lose one so young, so amiable and so helpful, from our church. This afternoon, there came up suddenly a strong, hot wind, which seemed to blast everything in its course, and raised the temperature very suddenly. It seems to me I never experienced anything like it before. (T.S.R. 49. 2 P.M. 90. S.S. 86.)

Sept. 6. Tuesday. By order of the Vice President, this was appointed a day for prayer all over the nation, for the President Garfield, as he is today moved from the White House in Washington to a town on the sea-shore in New Jersey, at his urgent request, as he has long thought he could breathe better where he could get the ocean air. So a car has been constructed on purpose to take him there at a great expense, with a bed in the center, and today all pray that the sufferer may arrive safely, and may soon be blessed with returning strength. For over two months, we have alternated between hope and fear on his behalf. He has a corps of able physicians attending him, but their modes are much criticized because they use stimulants so freely. Must he die? God knows. (T.S.R. 56. 2 P.M. 91. S.S. 84.)

Sept. 7. Wednesday. Wrote to Ida and received letters from Uncle H., Ida and Howard. Uncle H. is thinking some of attending the Gen. Association to meet in Los Angelos - says he will go, if I will go with him. I do not feel able to make the trip. Howard's and Ida's letter told of a pleasant trip to the roads in Sonoma Co. with their schools. Ada had a letter from her former school in Tulace Co. They offer the same school to Ida, thinking she is at home. Ada, on any suggestion, decides to take the school herself. (T.S.R. 56. 2 P.M. 93. S.S. 84.)