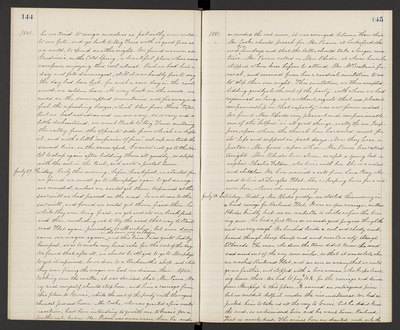 1881. So we tried to resign ourselves as patiently as we could to our fate, and go back to Big Trees with as good face as we could, to spend another night. We found we were at Gardiner's, or the Cold Spring, a beautiful place, where were campers, enjoying this cool ritual. But we had lost a day and felt discouraged, still it was hardly fair to say the day had been lost, for such a rare day in the cool woods, we seldom have. At every break in the woods, we could see the snow capped mountains, not far away, and feel the refreshing breezes, which blow from their tops. But we had not advanced on our way, so weary and a little disheartened, we went Back to Big Trees, entering the valley from the opposite-side from which we left it, and with a little "confusion of face", set up one tents the second time, on the same spot. I would not go to the Hotel to sleep again after bidding them all goodby, so slept with rest in the tent, and wrote a postal home.

July 29. Friday. Early this morning, before breakfast, we started, for we found we must go to Murphys' again to get our wagons mended, unless we could get them repaired at the saw mill we had passed on the road. So we drove to the saw mill, and found we could get them fixed there. So while they were being fixed, we got and ate our breakfast and then, concluding not to try the road that way to Railroad Flat again, proceeded to Murphys', but soon down came our wagon again, in the same way as before and this time I was quite badly bumped, so as to make my head ache for the rest of the day. We found that, after all, we should be obliged to go to Murphys' to get it repaired. So we drove to a blacksmith's shop, and while they were fixing the wagon, we had our diner there. After talking over the matter, it was decided that Mr. Pascoe, Mary and myself, should stop here, and hire a carriage from this place to Greve's, while the rest of the party with the wagons should proceed home. Mr. Cooke, who was granted a fine weeks vacation, had been intending to go with me to Greve's for a further rest, but as Mr. Pascoe was more weary than he and

1881. so needed the rest more, it was arranged between them that Mr. Cooke should preach for Mr. Pascoe at Lockeford the next two Sundays, and that the latter should take a longer vacation. Mr. Pascoe called on Mrs. Rhodes, at whose house he stopped when here before to attend Mr. McCraken's funeral, and received from her a cordial invitation to us to stop there over night. This invitation we three accepted, bidding goodbye to the rest of the party, with whom we had sojourned so long, not without regrets that our pleasant companionship in that capacity, was now forever include. We found Mrs. Rhodes very pleasant and companionable one of the "helpers" in all good things, really the one, I suppose, upon whom the church here has rested most for its life and support in past days. Now they have a pastor - Mr. Jones - upon whom Mr. Pascoe has called tonight. Mrs. Rhodes lives alone, except a young lad - a nephew - Charlie Felton, who lives with her She is a widow and childless. We have received a call from Lena Perry, who used to live at Douglas Flat. She is keeping house for a widower here, whom she may marry.

July 30. Saturday. Bidding Mrs. Rhodes goodbye we started this morning in a hired carriage for Railroad Flat. It was an open carriage, so Mrs. Rhodes kindly lent us an umbrella to shield us from the burning sun. We had a fast team so we made good progress though the road was very rough. We lunched beside a cool and shady creek, passed through Sheep Camp and went near Cave city through El Dorado. The man who drove the team didn't know the road and went out of the way some miles, so that it was so late when we reached Railroad Flat, and we were so weary that we could go no farther, and stopped with a lone woman who keeps boarding house there. We had to pay $16 1/2. for the carriage and driver from Murphys' to this place. It seemed an outrageous price but we couldn't help it under the circumstances. We had expected him to take us all the way to Greve's, but he didn't know the road, so we dismissed him and he went home. Railroad Flat is nearly dead. The mines her are deserted and only the