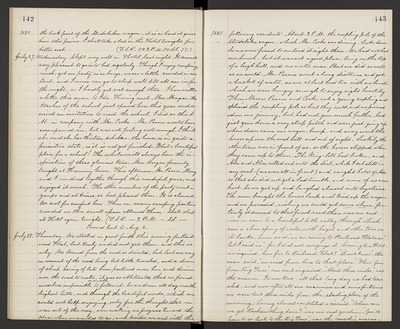 July 27. Wednesday. Slept very well in Hotel last night. It seemed very pleasant to go into bed regularly. Though I enjoy camping much, yet our party is so large, we are a little crowded in our tent, and I never can go to sleep well till all are in for the night, so I hardly yet rest enough there. I have written a letter this morn to Ida. Having met Mrs. Morgan, the teacher of the school just opened here this year and received an invitation to visit the school. I did so this A.M. in company with Mr. Cooke. Mr. Pascoe would have accompanied me, but was not feeling well enough. I think she said she has thirteen scholars - the house is in quite a primitive state, as it is not yet finished. What a beautiful place for a school! The scholars will always have the inspiration of these glorious trees. Mrs. Morgan formerly taught at Harmony Grove. This afternoon, Mr. Pascoe, Mary and I wandered together through this wonderful grove, and enjoyed it much. The other members of the party went in groups and at times, as best pleased them. It is almost too cool for comfort here. There are many camping parties crowded on this small space allowed them. Shall sleep at Hotel again tonight. (T.S.R.- 2 P.M. - S.S. -

July 28. Thursday. We started in good faith this morning for Railroad Flat, but truly we did not get there, and this is why. We turned from the road as directed, but lost our way on account of the road being but little traveled, and a drove of sheep having of late been postured near here and driven over the road to water, it was so obliterated that we found ourselves impossible or unable to follow it. So we drove all day over the highest hills, and through the beautiful words, which we could not help enjoying, only for the thought that we were out of the way, were making no progress toward the place where we waited to go, and besides we meet with the

1881. following accidents, About 2 P.M. the coupling pole of the Studebaker wagon, which Mr. Cooke was driving, broke down. So we were forced to unload it right there. We had not had our lunch, but it was not a good place, being on the top of a high hill, and no water near. But we did as well as we could. Mr. Pascoe went a long distance and got a bucket of water, so we at last had tea with our lunch, which we were hungry enough to enjoy right heartily. Then Mssrs. Pascoe and Cooke cut a young sapling and spliced the coupling pole as best they could, and we proceeded on our journey, but had not gone much further, had just gone down a very steep pitch and were just going up when down came our wagon, bump, and away went the horses up over the next hill and out of sight. Luckily the other team was in front of us, so the horses stopped when they came up to them. The king-bolt had broken, and Ada and Alice rolled out into the dirt, which I sat still in my seat (we were all in front) and caught hold of Ada so that she did not get a bad tumble, and none of us were hurt. So we got up and laughed almost into hysterics. The men brought the horses back and tied up the wagon and we proceeded, wishing we could get some where, for truly it seemed to that forest road there was no end. Soon we came to a beautiful little valley, through which ran a clear spring of water, with hazel and other trees on its banks. Some said, "we are coming to Railroad Flat now," but I said "no", for I did not recognized it. Coming to a Hotel we inquired, "how far to Railroad Flat?" "Don't know", the man said, "no road from here to that place." "How far from Big Trees," was next inquired, "About three miles," was the answer. It was true - all that long day we had traveled, and now after all our weariness and misfortunes we were but three miles from the starting place of the morning, having almost completed a circuit. "Where can we get blacksmithing done?" was our next question - "You'll have to go back to the Big Trees", was the consoling answer.