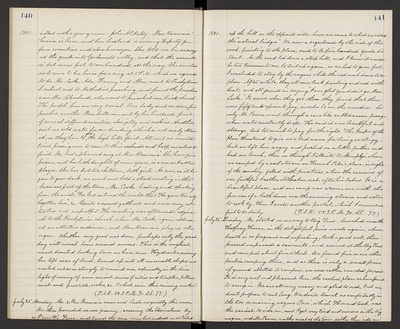 1881. called with a young man - John McNulty. Mrs. Beauvais' home is here, and her husband is mining Deputy for four counties, and also Surveyor. She told me he surveyed the grade into Yo-Semite valley, and that the ascent is but seven feet to one hundred, all the way. She invited us to come to her house for a sing at 5 P.M. which we agreed to do. Mr. Cooke, Ada, Fanny and Alice and to Presbyterian S. school and to Methodist preaching, and found the preacher was Mr. Cleveland, who used to preached our brick church. The people here are very social. One lady sent us some fine preaches, another Mrs. Sullivan, sent by her husband, fruit of several different varieties, also jelly and cookies. Another sent us cold water for our drinking, which is not easily obtained as they have to go to the high hills for it. All sent us invitations, pressing ones, to come to their orchards and help ourselves to fruit. We had a pleasant sing at Mrs. Beauvais'. She has a fine piano, and her little daughter of nine years, is a remarkable player. She has but two children, both girls. As soon as it began to grow dark, we went and held a street meeting in the business part of the town, Mr. Cooke leading, and speaking from the words, "For God so loved the world that He gave His only begotten Son", &.c. Quite a crowd gathered and were very attentive and respectful. The meeting was afterwards adjourned to the Presbyterian church, where Mr. Cooke again addressed an attentive audience, and Mrs. Beauvais played the organ. Whether any good was done, perhaps only the great day will reveal. Some seemed serious. This is the roughest most deserted looking town we have seen. Hydraulic mining has left acres of land, turned up into all conceivable shapes and washed out so as strongly to remind one, especially in the dim light of evening of some ancient ruins of cities and temples, pillars erect and prostrate, arches, &.c. O what ruin this mining makes! (T.S.R. 62. 2 P.M. 90. S.S. 77.)

July 25. Monday. Mr. & Mrs. Beauvais came and bade us goodbye this morn. We then proceeded on our journey, crossing the Stanislaus by Parrott's Ferry, and found the [?] very hot indeed as we toiled

1881. up the hill on the opposite side. Soon we came to what are called the "natural bridges" We soon a signboard by the side of the road, pointing to the place, said to be five hundred yards distant. As the road led down a steep hill, and I knew it would be too tiresome to me to toil up again, as we had to go on foot, I concluded to stay by the wagons while the rest went down to explore. After awhile, they all come back panting and red with heat, and all joined in saying, "I am glad you didn't go, Mrs. Locke." It seems when they got them, they found that there were fifty cents apiece to pay, in order to see the wonders. So only Mr. Pascoe went through a cave like subterranean passage where water constantly drops. He said it was beautiful and strange, but too much to pay for the sight. The keeper of the place threatened to give us a bad name for being so stingy, but we left him angry and pushed on a little farther and had our lunch, then on through Vallecito to Murphy's, where we camped by a cool stream on French Peter's place, in sight of the cemetery, filled with pine trees, when the remains of our faithful brother McCraken rest, after his labors. It is a beautiful place, and our camp was a nice one, with the free use of a bath house over the running stream and a stove to cook by. Here I wrote another postal, which I scarce ever fail to do daily. (T.S.R. 58. 2 P.M. 90. S.S. 77.)

July 26. Tuesday. We started on our way to Big Trees, lunched near the Halfway House, in the delightful pine woods again, whose breath is so fragrant and refreshing, took a good rest, then pressed on, passed a sawmill, and arrived at the Big Trees and camped about five o'clock. We found five or six other parties camping there, and as there is only a small piece of ground allotted to campus, we were rather crowded for camp. It is very cool and pleasant here, the coolest place we have found to camp in. We are all very weary and glad to rest, but we don't propose to rest long. We don't travel as comfortably in the two remaining wagons. Ones', which Howard took, was the easiest to ride in, and I get very tired and nervous in the Big wagon, and Mr. Pascoe walks most of the time rather than ride in