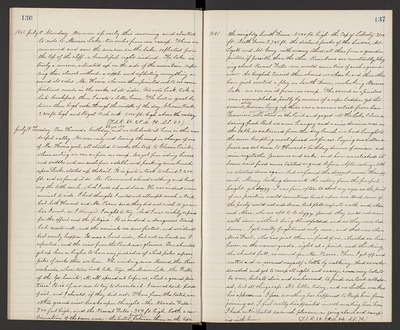 1881. July 18. Monday. We were up early this morning and started to ride to Mirror Lake - two miles from our camp. There we remained and saw the sunrise in the lake, reflected from the top of the cliff - a beautiful sight indeed. The lake is truly a mirror, situated up on the side of the mountain, reposing there almost without a ripple and reflecting everything around its sides. Mr. Harris, who was there, pointed out to us some pictures made in the rocks, at its sides. We rode back, took a late breakfast, then I wrote a letter home. The heat is great between these high rocks, through the middle of the day - Glacier Rock - 3,200 ft. high and Royal Arch rock - 2000 ft. high above the valley. (T.S.R. 64. 2 P.M. 90. S.S. 80.)

July 19. Tuesday. Our Howard's birthday, 22 yrs. old and we celebrate it here in this wonderful valley. We rose early, and leaving the camp in charge of one of Mr. Harris' girls, all started to make the trip to Glacier Point, whose railing we can see from one camp. We got four riding horses and saddles and one made from a stable, and packing some lunch upon Duke, started up the trail. It is quite a task to climb 3,200 ft. and we found it so. Mr. Pascoe went ahead walking and leading the little mule, which I rode up and down. He was indeed a nice animal to ride. I had thought I could not attempt such a trip, but both Howard and Mr. Pascoe said they did not wish to go unless I want, so I thought I ought to try. And I was richly repaid for the effort and the fatigue. It is indeed a dangerous trail but made well, and the animals are sure footed, and accidents but rarely happen. It was a hard ride, but not so hard as I expected, and the view from the Point was glorious. One should get up here or higher to have any just idea of what piles upon piles of rocks these are here. The winding river Merced, the three orchards, whose trees look like toys, the Mirror Lake, the Falls of the Yo-Semite, all, all spread out before us, what a grand picture! It is of no use to try to describe it - I cannot do it words fail, and I should, if they did not. Then from the Hotel, another grand view breaks upon the sight - the Nevada Falls - 700 feet high, and the Nemal Falls - 350 ft. high, both a continuation of the same river - the hotel snow's between them on the left

1881. the mighty South Dome - 5000 ft. high - the Cap of Liberty - 3,100 ft. North Dome 3,725 ft. the distant peaks of the Sierras, Mt. Lyell and Mt. Gray with many others, all these from a grander picture, if possible, than the other. Rainbows are constantly playing about Vernal Falls - one would never tire of such grand view. An English tourist there showed us where he and three others have just erected a flag on South Dome, overlooking Mirror Lake - we can see it from our camp. The ascent is a perilous one, accomplished partly by means of a rope ladder, yet the second white human being up there was a woman artist from San Francisco, (Augusta Sweetland Hutchings) who stood on the Point and gazed into the Lake below - a daring feat. But we were hungry and a nice dinner was on the table, so we turned from the dry lunch we had brought to the more tempting meal spread out for us. Paying one dollar a piece we sat down to Howard's birthday dinner of venison and nice vegetables, preserves and cake, and how we relished it! Some said food never tasted so good before. After resting a little we started down again, but we found the descent worse than ascent. Many looking down into the valley from the fearful height, get dizzy. I was fain often to shut my eyes as the peril of our position would sometimes burst upon me. And some of the party could not ride down, but felt safer to walk, and Ada and Alice, who are apt to be dizzy, found they could not even walk down without being blindfolded, and so they were led down. I got really frightened only once, and that was when Miss Dart, who was just then in front of us, whirled on her horse, on the narrow grade, right at a point, and thinking she should fall, screamed for Mr. Pascoe. Then I got off and rested and re-assured myself a little by walking. And so we descended and got to camp all right and weary, some very late, to be sure, but all alive and unharmed, to find our tent collapsed, but all things safe. No letter today, and no Luther makes his appearance. I fear something has happened to keep him from joining us. I feel really disappointed in not meeting him here, I had anticipated so much pleasure in going about and camping with him. (T.S.R. 58. 2 P.M. 84. S.S. 76.)