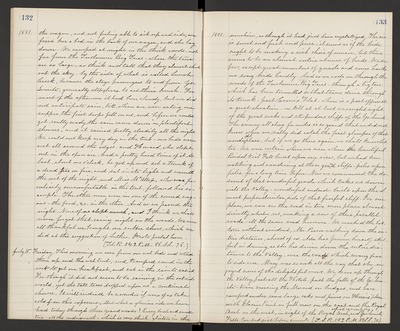 1881. the wagon, and not feeling able to sit up and ride, we fixed her a bed in the back of our wagon, and she lay down. We camped at night in the thick woods - not far from the Tuolumne Big Trees - where the trees are so large, so thick and tall that they almost shut out the sky - by the side of what is called Lunch Creek, because the stage passengers to and from Yo-Semite, generally stop here to eat their lunch. For most of the afternoon it had been cloudy, but we did not anticipate rain, till, when we were eating our supper, the first drops fell on us, and before we could get really ready, the rain came down in plentiful showers, and it rained pretty steadily all the night. We could not keep very dry in the tent - our beds were wet all around the edges - and Howard, who slept out in the open air - had a pretty hard time of it. At last, about one o'clock, he got up and set a trunk of a dead tree on fire, and sat in its light and warmth the rest of the night, and Miss McAllep, who was peculiarly uncomfortable in the tent, followed his example. The other men were in one of the covered wagons - the food, &.c. in the other. And so we passed the night. None of us slept much, and I think we shall never forget that rainy night in the woods. We were all thankful we brought our rubber shoes, which we did at the suggestion of Luther. Wrote postal home. (T.S.R. 54. 2 P.M. 86. S.S. 76.)

July 15. Friday. This morning we rose from our wet beds and rolled them up and the wet tent, and tramped round in the wet to get our breakfast, and sat in the rain to eat it. For though it did not seem to be raining in the outside world, yet the tall trees dropped upon us a continual shower. It will indeed be a wonder if none of us take cold from this exposure. But what a glorious ride we have had today through these grand woods! Every bush and small tree - all the undergrowth - which is very thick, glistens in the

1881. sunshine, as though it had just been crystallized. The air is sweet and fresh and pure - it seems as if the birds ought to be making a rich choir ouf music, but there seems to be an almost entire absence of birds. We see few, except great numbers of quails and some hawks no song birds hardly. And so we rode on through the woods of the Tuolumne (Grove) Big Trees - through a big tree which has been travelled so that teams drive through its trunk - past Crane's Flat - where is post offices at a great elevation - on till at at last we caught sight of the great rocks and stupendous cliffs of the Yo-Semite. The scenery all along for miles is so grand that we did not know when we really did catch the first glimpse of that wonderful place, but if we go there again we shall know better. We were certain where we were when the beautiful Bridal Veil Fall burst upon our view, but we had been watching and wondering at those grand cliffs - piles upon piles, for a long time before. Now we commenced the descent of that wonderful grade which takes us down into the Valley - wonderful indeed - built upon the almost perpendicular side of that fearful cliff. In one place, we can see the road in two more place almost directly under us, making a row of three parallel roads - all the same road however. We reached the bottom without accident, Mr. Pascoe walking downt the entire distance, ahead of us. Ada has proven herself skilful in driving, as she has driven down the entire distance to the Valley, over the road which many fear to ride over. Mary was so sick all the way that she enjoyed none of the delightful views. We drove up through the Valley, past all the Hotels - past the falls of the Yo-Semite - twice crossing the Merced on bridges, and have camped under some large oaks and pines on Harris place with Glacier Point in full view on the east, and the Royal Arch on the west, in sight of the Royal Arch which is nearly dry and Yo-Semite Falls. Camped just before sunset. (T.S.R. 58. 2 P.M. 83. S.S. 70.)