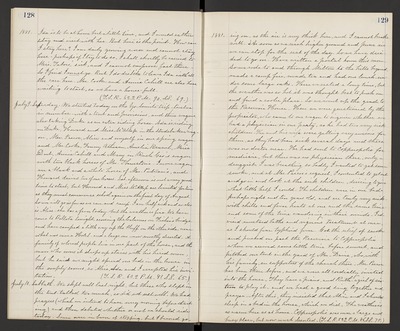 1881. Ida is to be at home but a little time, and I would rather stay and visit with her. But here is the point. How can I stay here? I am daily growing worse and cannot stay here - perhaps if I try to do so, I shall shortly be carried to Mrs. Tabor's, sick, and I cannot improve fast there. So I find I must go. But I do dislike to leave Ida with all the care here. Mr. Cooke and Annie Cahill are also here waiting to start, so we have a house-full. (T.S.R. 62. 2 P.M. 90. S.S. 69.)

July 9. Saturday. We started today on the Yo-Semite trip - twelve in number - with a tent and provisions, and three wagons, also taking Duke as an extra riding horse. Ada is riding on Duke, Howard and Miss McAllep in the Studebaker wagon, Mr. Pascoe, Alice and myself in our spring wagon. and Mr. Cooke, Fanny Athearn, Amelia Bruml, Miss Dart, Annie Cahill and Mary in Uncle Geo's wagon with two black horses of Mr. Thurston's. In our wagon are a black and a white horse of Mr. Putnam's, and Howard drives two of our horses. Sat. afternoon is not a very good time to start, but Howard and Miss McAllep are limited for time as they must commence school again on the first day of August. So we will go as far as we can and camp. I am half sick and so also is Alice - she has fever today but the weather is fine. We have come to Ballota tonight crossing the Calaveras on Fisher's bridge and have camped a little way up the bluff on the other side, near what was once a Hotel - and a large one - now mostly deserted. A family of colored people live in one part of the house, and the man who owns it sleeps up stairs with his hired men, but he said we might spread our beds in the house in the empty rooms, so Alice, Ada and I accepted his invitation. (T.S.R. 60. 2 P.M. 81. S.S. 65.)

July 10. Sabbath. We slept well last night, but those who slept in the tent talked too much, so did not rest well. We had prayers (which we intend to have every morning before starting) and then debated whether or not we should ride today. Some were in favor of stopping, but I favored going

1881. on, as the air is very thick here, I cannot breathe well. As soon as we reach higher ground and purer air we can stop for the rest of the day. So we have decided to go on. Have written a postal home this morn. So we rode to and through Milton to the hills beyond, made a camp fire, made tea and had our lunch under some large oaks. Here we rested a long time, but the weather was so hot it was thought best to push on and find a cooler place. So we went up the grade to the Reservoir House. Here we were questioned by the proprietor, who came to our wagon to inquire whether we had a physician in our party, as he had two very sick children. He and his wife were getting very anxious for them, as they had been sick several days and there was no doctor near. He had sent to Copperopolis for medicine, but there was no physician there, only a druggist. I was breathing so badly I wanted to get some smoke, and at Mr. Pascoe's request, I consented to get out and go in and look as the sick children, desiring to give what little help I could. The children were in one bed perhaps eight and ten years old, and are truly very sick with chills and fever heats at one and the same time and some of the time wandering in their minds. I advised mustard baths and vigorous treatment at once, as I should fear typhoid fever. Got the relief of smoke and pushed on past the Reservoir to Copperopolis where we arrived some little time before sunset, and pitched our tent in the yard of Mr. Davis, who, with his family, are supporters of the church there. Mr. Pascoe has been there before, and we were all cordially invited into the house. They have a piano, and Ruth - a girl of sixteen to play it and we had a good sing together and prayer. After this, they insisted that Alice and I should sleep in a bed in the house, which we did. The weather's as warm here as at home. Copperopolis was once a large and busy place, but now much deserted. (T.S.R. 52. 2 P.M. 86. S.S. 75.)