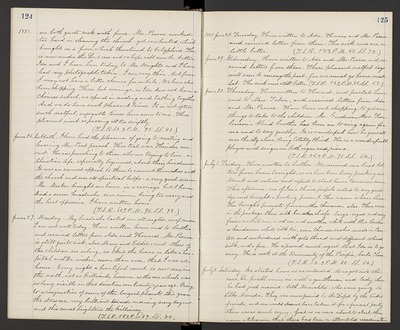 1881. are both quite sick with fever. Mr. Pascoe worked too hard in cleaning the church - got over heated, which brought on a fever which threatened to be typhoid. He is now under the Dr.'s care and we hope will soon be better. Ida and I have been today to Mr. Wright's and I have had my photographs taken. I am very thin, but fear I may not have a better chance for awhile. We have also been shopping. These Sat. evenings, as Ida does not have a Chinese school, we spend in reading and talking together. And we do have such pleasant times. It is not often such restful, enjoyable times have come to me. This pleasant visit is passing all too swiftly. (T.S.R. 60. 2 P.M. 95. S.S. 80.)

June 26. Sabbath. I have had the pleasure of going to meeting and hearing Mr. Post preach. His text was, "Hinder me not". He was preaching to those who are trying to live a Christian life, especially beginners, about their hindrances. It was an earnest appeal to them to connect themselves with the church and rise all spiritual helps - a very good sermon. Mr. Meeker brought me home in a carriage but I have had a severe headache ever since, being too weary and the heal oppressive. I have written home. (T.S.R. 60. 2 P.M. 95. S.S. 78.)

June 27. Monday. My headached lasted me all night, so of course I am not well today. Have written home and to Luther and received letters from Ada and Howard. Mr. Pascoe is still quite sick, also Mary and Eddie, and others of the children are ailing, so that the house is like a hospital and Dr. wishes, more than ever, that I was at home. Every night a beautiful comet is now seen in the north, not so brilliant, however, as the one which was so long visible in that direction over twenty years ago. Owing to a conjunction of some of the largest planets this year the stars are very brilliant towards morning every day now and this comet heightens the brilliancy. (T.S.R. 58. 2 P.M. 87. S.S. 80.)

June 30. Thursday. Have written to Howard, and postals home and to Mrs. Tabor, and received letters from Ada and Mrs. Pascoe. Have been out shopping, to get some things to take to the children. Mr. Gardner, Mrs. Tomlinson's blind brother has been in to sing again for me and to say goodbye. It is wonderful how he goes all over the city alone, being totally blind. He is a wonderfull player and singer on both organ and piano. (T.S.R. 56. 2 P.M. 75. S.S. 64.)

July 1. Friday. Have written to Luther. We received our last letters from home tonight, as we have been busy packing our trunk and valises and expect to start home tomorrow morn. This afternoon, one of Ida's China pupils called to say goodbye and brought a parting present. His name is Sam Linn. He brought presents from another Chinamen also. There were in the package three silk handkerchiefs - large-sized and very fine - a white one, a red one and another white with blue border - a handsome white silk tie, some Chinese sashes made in Canton and embroidered with gold thread and different colored silk and a fan. He expressed much regret that Ida is to go away. He is cook at the University of the Pacific, Santa Clara. (T.S.R. 62. 2 P.M. 80. S.S. 64.)

July 2. Saturday. We started home as we intended. As we got into the cars, Dr. Jewell came in with a gentleman and lady whom he had just married - both Normalites - who were going to Elko, Nevada. They were accompanied to the Depot by the bride's friends, and one would almost have taken it for a funeral party there was so much crying. Just as we were about to start there came a telegram that there had been an attempted assassination