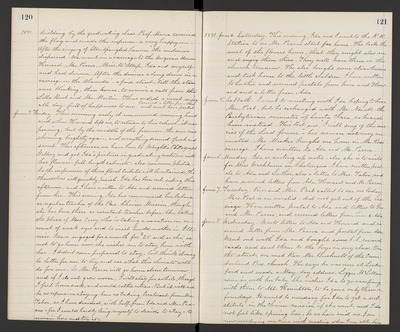 1881. building by the graduating class. Prof. Moore received the flag and made the response - a very happy one. After the singing of "Star-spangled banner" the audience dispersed. We went in a carriage to the Auzerais House. Howard, Mrs. Pascoe, Miss McAllep, Ida and myself - and had dinner. After the dinner a long drive in a carriage on the "Alameda" - a fine street - till the stars were blinking, then home, to receive a call from Lilla Burt and Mr. Martin. Thus ended a most enjoyable day - full of happiness to me. Received a letter from Ada and sent her a postal.

June 3. Friday. This morning early it commenced raining hard and when Howard left us, to return to his school, it was pouring, but by the middle of the forenoon, the sun was shining brightly again, and everything seemed fresh and sweet. This afternoon we have been to Wright's Photograph Gallery and got Ida's pictures in graduating costume with her flowers - full-length cabinets - also common photos. So the impression of those floral tributes will be retained, tho' themselves will quickly perish. Ida has been out riding this afternoon, and I have written to Ada and received letter from her. This evening Ida has commenced her labors as regular teacher of the Pres. Chinese Mission, though she as been there as assistant teacher before. She takes the place of Mrs. Carey, who is taking a vacation on account of weak eyes and to visit her old mother in Illinois. Ida is engaged for a month for $25. and as she is not to go home now, she wishes me to stay here with her. I didn't come prepared to stay, but think it may be better for me to try and see what this climate will do for me. So Mr. Pascoe will go home alone tomorrow, and if I do not grow worse, I will stay for awhile, though I feel home sick, and would rather return. But it will not be as expensive staying here as taking treatment from Mrs. Tabor, so I have decided, with help from Ida and Mr. Pascoe - for I could hardly bring myself to decide to stay - to remain here and try it.

1881. June 4. Saturday. This morning, Ida and I went to the R.R. Station to see Mr. Pascoe start for home. He took the most of the flowers home, that they might also see and enjoy them there. They will have them in the church tomorrow. He also bought some strawberries and took home to the little children. I have written to Luther and received postals from him and Howard and a letter from Ada.

June 5. Sabbath. I went to meeting with Ida hoping to hear Mr. Post, but he exchanged with Mr. Nowell - the Presbyterian minister of Santa Clara, so heard him instead. His text was, "I will sing of the mercies of the Lord forever." - his sermon not very animated. Mr. Meeker brought me home in Mr. Ross carriage. I have written to Ada and Mr. Pascoe.

June 6. Monday. Ida is writing up notes - also she is to write for Miss Washburne in Chatanqua. I have written postals to Ada and Luther, also a letter to Mrs. Tabor, and have received letters from Ada. Howard and Mr. Pascoe.

June 7. Tuesday. Rev. and Mrs. Post called to see us today. Mrs. Post is an invalid - din not get out of the carriage. Have written postal to Ada and letters to Geo. and Mr. Pascoe, and received letter from him & Ada.

June 8. Wednesday. Wrote letters to Ada and Howard and received letter from Mr. Pascoe and postal from Ada. Went out with Ida and bought some S.S. reward cards and sent them to the boys in my class. On the street, we met Rev. Mr. Bushnell of the Cumberland Pres. church. He says he was once at Lockeford and made a May-day address. Lizzie McLellan came in with her baby. She wishes Ida to go camping with them to Mt. Hamilton, to be gone only three or four days. It would be necessary for Ida to get a substitute in the chinese mission if she went, and I do not feel like sparing her. So we have said no. I am now occupying my time with reading when I am able - have