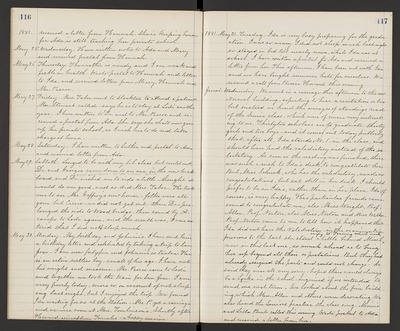 1881. received a letter from Hannah. She is keeping house for Ada is still teaching her private school.

May 25. Wednesday. Have written notes to Ada and Mary and received postal from Hannah.

May 26. Thursday. The weather is windy and I am weak and feeble in health. Wrote postal to Hannah and letter to Ida, and received letters from Mary, Hannah and Mr. Pascoe.

May 27. Friday. Mrs. Tabor went to Stockton to attend a patient. Mrs. Stewart called - says he is to stay at Lodi another year. I have written to Dr. and to Mr. Pascoe and received a postal from Ada. She says she shall now give up her private school, as I wish her to do and take charge at home.

May 28. Saturday. I have written to Luther and postal to Ada and received letter from Ada.

May 29. Sabbath. Longed to be with my S.S. class but could not. Dr. and Georgie came down to see me in the new buckboard, and Dr. wished me to ride a little - thought it would do me good, and so did Mrs. Tabor. He took me to see Mr. Geffroy's new house - folks were all gone but Carrie - we did not get out then Dr. prolonged the ride to Wood bridge, then round by Acampo to Lodi again, and the result was, I was so tried that I did not sleep much. * words about Horace - see letter to Horace June 28

May 30. Monday. My birthday and Johnnie's. I have sent him a birthday letter and celebrated by taking a trip to San Jose. I am now fortyfive and Johnnie is twelve. He is an active restless boy - small of his age - I have not his weight and measure. Mr. Pascoe came to Lodi and together we took the train for San Jose. I am very poorly today, more so on account of not sleeping last night, but I enjoyed the trip. We found Ida waiting for us at the Station - Mr. P. got a carriage and we were soon at Mrs. Tomlinson's. Shortly after Howard arrived from Tomales - a happy reunion.

1881. May 31. Tuesday. Ida is very busy preparing for the graduation. I was so weary I did not sleep much last night so stayed in bed till nearly noon, while Ida was at school. I have written a postal to Ada and received a letter from her. This afternoon, I have been out with Ida and we have bought summer hats for ourselves. We received a call from Bessie Howard this evening.

June 1. Wednesday. We went in a carriage this afternoon to the new Normal building, expecting to hear a recitation on two but instead we heard the averages of standings read of the Senior class, which were of course very interesting to us. Thirtytwo scholars are to graduate - thirty girls and two boys - and it comes out today publicly that, after all, Ida stands No. 1 in the class, and should have had the valedictory instead of the salutatory. As soon as the reading was finished, there was such a rush to Ida's desk, to congratulate her. But Miss Schuck, who has the valedictory, made no congratulations, but sat still in her dusk. I should prefer to be in Ida's, rather than in her place. Ida, of course, is very happy. Her particular friends came round to congratulate me, also Miss Wright, Prof. Allen, Prof. Norton, also Miss Norton and Miss Walker. Prof. Norton came to me to tell how it happened that Ida did not have the Valedictory - in the examination previous to the last she stood a little behind Miss S. owing to Training school work now in this last one, so much ahead as to bring her up beyond all their expectations. But they had already assigned the parts and could not change - he said they were all very sorry - hoped there would always be a Locke in the school - inquired if we intended to send one next term. We looked about the five building, which Mrs. Allen and others were decorating. We also heard the Seniors practice the class song. Minnie and Lilla Burt called this evening. Wrote postal to Ada and received a letter from her.