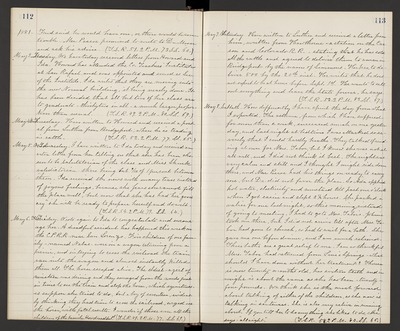 May 3. Tuesday. We have today received letters from Howard and Ida. Howard has attended the Co. Teachers' Institute at San Rafael, and was appointed and served as Sec. of the Institute. Ida writes that they are moving into the new Normal building, it being nearly done. It has been decided that all but two of her class are to graduate - thirtytwo in all - a much larger proportion than usual. (T.S.R. 49. 2 P.M. 80. S.S. 69.)

May 5. Thursday. I have written to Ida today and received an extra letter from her telling us that she has been chosen to be Salutatorian of the class and Miss Shuck valedictorian - there being but 3/10 of 1 percent between them. Ida received the news with many tears instead of joyous feelings, because she fears she cannot fill the place well, but now that she has had her "good cry" she will be ready to prepare herself and do well. (T.S.R. 54. 2 P.M. 79. S.S. 64.)

May 6. Friday. Wrote again to Ida to congratulate and encourage her. A dreadful accident has happened this week on the C.P.R.R. near San Lorenzo. Five children of one family - named Nebas - were in a wagon returning from a picnic, and in trying to cross the railroad the train ran into the wagon and almost instantly killed them all. The horse escaped alive. The eldest - a girl of nineteen was driving and they emerged from the woods just in time to see the train and stop the horse, which eyewitnesses suppose she tried to do, but a boy of seventeen, evidently thinking they had time to cross the railroad, urged on the horse, with fatal results. I wonder if those were all the children of the family. How dreadful! (T.S.R. 49. 2 P.M. 77. S.S. 69.)

May 7. Saturday. Have written to Luther and received a letter from him, written from Hawthorne - a station on the Carson and Colorado R.R. - stating that he has sold all the cattle and agreed to deliver them to a man in Bridgeport by the name of Simmons. He has to deliver 500 by the 20th inst. He writes that he does not expect to be at home before Sept. 1st. He wants to sell out everything and leave the State forever, he says. (T.S.R. 52. 2 P.M. 83. S.S. 67.)

May 8. Sabbath. How differently I have spent the day from what I expected. The asthma, from which I have suffered for more than a week, increased much on me yesterday, and last night at bedtime I was attacked so severely that I could hardly breathe. They talked of sending at once for Mrs. Tabor, but I knew she was not at all well, and I did not think it best. The night was very calm and still and I thought I might ride down there, and Mr. Pascoe had his things on ready to carry me, but Dr. did not favor the plan. So Ada applied hot water, electricity and mustard till past one o'clock when I got easier and slept 2 1/2 hours. She packed a valise for me last night, so this morning, instead of going to meeting, I had to go to Mrs. Tabor's. Johnnie took me there, but I did not arrive till after Mrs. Tabor had gone to church, so had to wait for a bath. She gave me one before dinner, and I am much relieved. These baths are a great relief to me. I am thankful Mrs. Tabor had returned from Lane's Springs - what should I have done without her treatment? Theresa is now twenty months old, has sixteen teeth and in weight is about the same as she has been - twentyfour pounds. We think she is the most forward about talking of either of the children, as she now is talking in sentences. She is also very active in running about. If you tell her to do anything she likes to do, she says - "all ight". (T.S.R. 58. 2 P.M. 80. S.S. 65.)