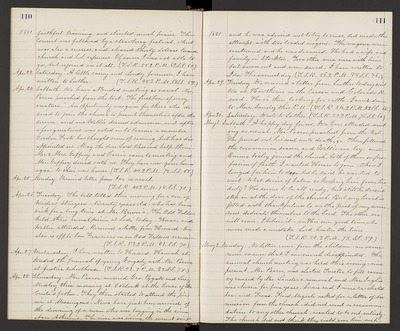 1881 faithful training, and elicited much praise. The Concert was followed by a strawberry festival, which was also a success, and cleared thirty dollars towards church and S.S. expenses. Of course, I was not able to go, but rejoiced in it all. (T.S.R. 50. 2 P.M. 69. S.S. 60.)

Apr. 24. Sabbath. We have attended meeting as usual. Mr. Pascoe preached from the text, "The first born of every creature." An opportunity was given for those who desired to join the church to present themselves after the service, and our Willie desired admission, and after a few questions was voted in to become a member. Gordon Foote has thought some of coming, but has disappointed us. May the dear Lord bless and help them. Mr. & Mrs. Geffroy and Carrie came to meeting and Mr. Geffroy dined with us. They have now gone home again to their new house. (T.S.R. 44. 2 P.M. 72. S.S. 68.)

Apr. 26. Tuesday. The bell tolled this morning for a son of Widow Sturgeon - twenty years old - who has been sick for a long time at Mr. Brown's. The Odd Fellows held their annual picnic at Lodi today - Horace and Willie attended. Received a letter from Howard - he also is off to San Francisco on an Odd Fellows excursion. (T.S.R. 52. 2 P.M. 81. S.S. 70.)

Apr. 28. Thursday. Mr. Pascoe married Geo. Pygall and Lucy Medley this morning at 8 o'clock at the house of the bride's father. They then started to attend the picnic at Messengers. News have just been received of the drowning of a man who was logging in the river above Athearn's. The river was rising, the current swift

1881. and he was advised not to try to cross, but made the attempt with two loaded wagons. The wagons were overturned and he was drowned. He had a wife and family in Stockton. Two other men were with him but swam out and were saved. I have written to Ida. The warmest day. (T.S.R. 56. 2 P.M. 88. S.S. 76.)

May. 1. Sabbath. A happy day for us. We have attended meeting as usual. Mr. Pascoe preached from the text "He poured out his soul unto death," &.c. Then followed the communion season and Willie - our boy - and Emma Wiley joined the church, both of them on profession of faith. I wanted Horace to join - O how I longed for him to do so, but he said he wanted to wait. What device of Satan is keeping him from his duty? He seems to be all ready, but still he doesn't step in at the door of the church. But my heart is filled with thankfulness to see the first of my seven sons dedicate themselves to the Lord. The other six will come. I believe it in His own good time, who never made a mistake. Lord, hasten the time. (T.S.R. 50. 2 P.M. 73. S.S. 59.)

May. 2. Monday. No letters came from the children - an occurrence so rare that I am much disappointed. The annual church meeting was held this evening-nine present. Mr. Pascoe was elected Trustee to fill vacancy caused by Mr. Lander's removal, and Mr. Inglis was chosen for five years. Susie and I were re-elected Sec. and Treas. Fred. Megerle asked for a letter of dismission from the church - did not want a recommendation to any other church - wanted to be out, entirely. The church did not think they could give him such.