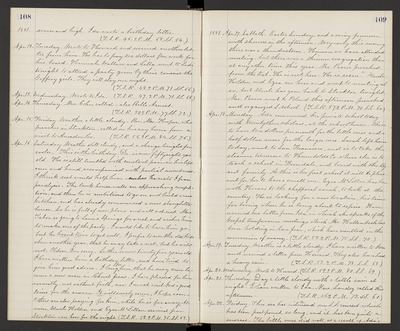 Apr. 12. Tuesday. Wrote to Howard and received another letter from him. He has to pay six dollars per week for his board. Hannah, Wallace and Silla went to Lodi tonight to attend a party given by their cousins-the Geffroy girls. They will stay over night. (T.S.R. 48. 2 P.M. 71. S.S. 66.)

Apr. 16. Saturday. Weather still cloudy, and a change tonight for cooler. This is the birthday. Dr. is now fiftyeight yrs. old. He is still troubled with constant pain in his left arm and hand, accompanied with partial numbness. I think rest would help him - unless he rests I fear paralysis. The tank house walls an approaching completion, and then he is ambitious to go on and build a new kitchen, and has already commenced a neww slaughter house. So he is full of new plans and will not rest. Mrs. Tabor is going to Lane's Springs for a rest, and wishes him to make one of the party. I would like to have him go, but he hasn't time to get well. I prefer to use the old kitchen another year, that he may take a rest, but he will not. Oh dear, I'm sorry - Luther is now twentyfive years old. I have written him a birthday letter, and have tried to give him good advice. I long for him, that he may soon become a new man in Christ Jesus. I have pleaded for him earnestly, not without faith, now I must wait God's good time for the answer. I will surely come, I hope soon. Oters are also praying for him, while he is far away. At noon, Uncle Holden and Ezra McLellan arrived from Stockton - are here for the night. (T.S.R. 58. 2 P.M. 76. S.S. 62.)

1881. Apr. 17. Sabbath. Easter Sunday, and a rainy forenoon, with showers in the afternoon. Very early this morning there was a thunderstorm. However we have attended meeting, but there was a thinner congregation than at any other time this year. Mr. Pascoe preached from the text, "He is not here - He is risen." Uncle Holden and Ezra are here and went to meeting also, but Uncle has gone back to Stockton tonight. Mr. Pascoe went to Poland this afternoon, preached and organized S. school. (T.S.R. 57. 2 P.M. 70. S.S. 60.)

Apr. 18. Monday. Ada commenced his private school today with twentythree scholars, at the school house. She is to have two dollars per month for the little ones and a half dollar more for the larger ones. Sarah left home today, went to San Francisco, and is to take the steamer tomorrow to Humboldt Co. where she is to teach a school in Ferndale, and board with the Byard family. As this is her first school it will be pleasant for her to have a small one. Ezra McLellan has been with Horace to the chapparal ranch, to look at the country. He is looking for a new location, his time for living where he is being about to expire. Have received our letter from Ida in which she speaks of the Gospel temperance meetings which Mr. Hallenbech has been holding in San Jose, which have resulted in the conversion of many. (T.S.R. 52. 2 P.M. 75. S.S. 70.)

Apr. 22. Friday. This eve has witnessed our S.S. concert which has been postponed so long, and it has been quite a success. The little ones did well, as a result of Ada's