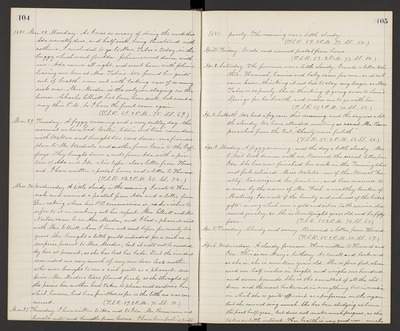 1881. Mar. 28. Monday. As I was so weary of doing the work that Ada usually does, and half sick, being threatened with asthma, I concluded to go to Mrs. Tabor's today, in the buggy which went for Ada. Johnnie went down with me. Ada came all right, and went home with Johnnie leaving me here at Mrs. Tabor's. We found her quite out of health - worn out with taking care of so many sick ones. Mrs. Meeder is the only one staying in the house. Charles Elliott has been here sick, but went away this P.M. So I have the front room again. (T.S.R 49. 2 P.M. 75. S.S. 69.)

Mar. 29. Tuesday. A foggy morning and a very sultry day - the warmest we have had. Willie, Eddie and "Boss" came down with Wallace and brought two cows down - one from our place to Mr. Wardrobe and another from Geo.'s to the Geffroys. They brought down a note from Ada with a picture of Ada and Ida - a tin-type - also a letter from Howard. I have written a postal home and a letter to Howard. (T.S.R 54. 2 P.M. 80. S.S. 74.)

Mar. 30. Wednesday. A little cloudy in the morning. I wrote to Hannah and received a postal from Ada and a letter from Dr. asking where his P.O. commission is, as he wishes to refer to it in making out his report. Mrs. Elliott and Mr. Norton came to see Mrs. Meeder, and I had a pleasant visit with Mrs. Elliott, whom I have not met before for nearly two years. She brought a little quilt intended for a crib as a surprise present to Mrs. Meeder, but it will not be needed by her at present, as she has loss her babe. But the incident reminded me very much of my own dear lost mother, who once brought to me a crib-quilt as a pleasant surprise. Mrs. Meeder's tears flowed freely as she thought of the pains her mother had taken to please and surprise her, which, however, had been fruitless, as far as the little one was concerned. (T.S.R 59. 2 P.M. 76. S.S. 70.)

Mar. 31. Thursday. I have written to Ada and to Ida. Mr. Pascoe came and brought note and bundle from home. I have feeling quite

Apr. 4. Monday. A foggy morning, and the day a little cloudy. Mrs. O'Neil took dinner with us. Received the usual letter from Ida. She has now finished her work in the Training School and feels relieved. Miss Webster - one of the Normal Faculty has resigned her position, and been married to a man by the name of Mr. Fish - a wealthy banker of Martinez. Ida wrote of the beauty and richness of the bridal gifts - among which were a gold and silver table service, diamond jewelry, &.c. She is twentyeight years old, and he fiftyfour. (T.S.R. 55. 2 P.M. 72. S.S. 60.)

Apr. 6. Wednesday. A cloudy forenoon. Have written to Howard and Ida. This is our Mary's birthday. As small and backward as she is, she is seventeen years old. She is four feet, eleven and one-half inches in height and weighs one hundred and seven pounds. She is the smallest of all the children and the most backward in everything but in music, in which she is quite efficient as a performer on the organ, but she canot sing much. She has been studying at home the past half year, but does not make much progress, as she takes so little interest, Her health is very good now - much