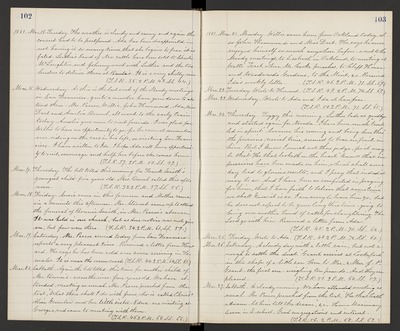 1881. Mar. 15. Tuesday. The weather is cloudy and rainy and again the concert had to be postponed. Ada has been disappointed in not having it so many times, that she begins to fear it is fated. Luther's band of Nev. cattle have been sold to Charles McLaughlin, and Johnny went with Luther and the two herders to deliver them at Banta's. It is very chilly rain. (T.S.R. 35. 2 P.M. 48. S.S. 44.)

Mar. 16. Wednesday. As this the last week of the Moody meetings in San Francisco, quite a number have gone down to attend them - Mr. Pascoe, Willie, John Hammond, Ada, Miss Dart and Amelia Bruml, all went to the early train today. Amelia goes more to visit friends. I was glad for Willie to have an opportunity to go, for he cannot remember ever riding on the cars in his life, or visiting San Francisco. I have written to Ida. I hope Ada will have opportunity to visit, encourage and help her before she comes home. (T.S.R. 37. 2 P.M. 50. S.S. 49.)

Mar. 20. Sabbath. Again the bell tolled - this time for another child of Mr. Brown's - across the river - four years old. We have attended meeting as usual. Mr. Pascoe preached from the text, "What then shall I do with Jesus, who is called Christ?" Alice Greenlaw and her little sister - Edna are visiting at George's and came to meeting with them. (T.S.R. 45. 2 P.M. 68. S.S. 66.)

1881. Mar. 21. Monday. Willie came home from Oakland today, also John Hammon and Miss Dart. He says he never enjoyed himself so much anywhere before went to the Moody meetings, to S. school in Oakland, to meeting at Watts' Track, where Mr. Cooke preaches, to Cliff House and Woodward's Gardens, to the Mint, &.c. Received Ida's weekly letter. (T.S.R. 46. 2 P.M. 71. S.S. 69.)

Mar. 24. Thursday. Foggy this morning, Luther bade us goodbye and started again for Nevada. I have been much "troubled in spirit" because his coming and being here this the precious revival time, seemed to bear no fruit in him. But I know I must not thus judge, for it may be that "He that looketh on the heart" knows that impressions have been made on him, which shall some day lead to glorious results, and I pray that indeed it may be so. And I have been so comforted in praying for him, that I have faith to believe that sometime we shall know it is so. I am sorry to have him go, but he does not expect to be gone long this time - going to bring over another band of cattle for slaughtering. The Lord go with him. Received a letter from Ada. (T.S.R. 45. 2 P.M. 70. S.S. 62.)