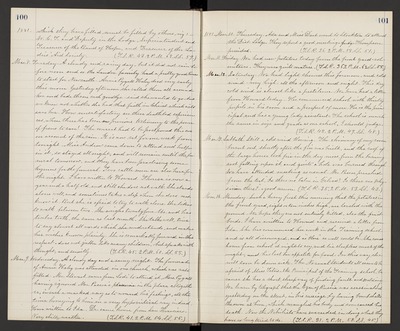 Mar. 8. Tuesday. A cloudy and rainy day, but it did not rain before noon and so the Lander family had a pretty good time to start for Newcastle. Annie Pygall Haley died very early this morn Yesterday afternoon she called them all around her and bade them each goodbye - said she wanted to go but we know not whether she had that faith in Christ which will save her. How unsatisfactory are these deathbed experiences, where there has been no previous testimony to the power of Jesus to save! The concert had to be postponed this eve on account of the rain. It is now set for one week from tonight. Alice Andrew came down to attend and help in it, so stayed all night, and will remain until the funeral tomorrow, and they have been practising some hymns for the funeral. Two cattle men are also here for the night. I have written to Howard. Theresa is now a year and a half old, and still she does not walk, She stands alone well, and sometimes takes a stop when she does not know it. But she is afraid to try to walk alone. She likes to walk between two. She weighs twentyfour lbs. and has twelve teeth, the same as last month. She talks well, tries to say almost all words which she understands, and makes her wishes known plainly. She is remarkably forward in this respect - does not jabber like many children, but speaks with thought, and sensibly. (T.S.R. 45. 2 P.M. 60. S.S. 55.)

Mar. 9. Wednesday. A cloudy day and a rainy night. The funeral of Annie Holey was attended in our church, which was well filled. Mr. Stewart came from Lodi to attend it, Mrs. Pygall having ignored Mr. Pascoe's presence in the place altogether, in such a marked way as to wound his feelings, all the time honeying to him in a very hypocritical way indeed. Have written to Ida. Dr. came home from San Francisco. Very chilly weather. (T.S.R. 41. 2 P.M. 54. S.S. 55.)

Mar. 12. Saturday. We had light showers this forenoon, and cold wind - very high - all the afternoon and night. This dry cold wind is almost like a pestilence. We had a letter from Howard today. He commenced school with thirty pupils in his room and a prospect of more. He is the principal and has a young lady assistant. The school is much the same in size and grade as our school, I should judge. (T.S.R. 42. 2 P.M. 49. S.S. 48.)

Mar. 13. Sabbath. Still a cold wind blowing. The chimney of any room burnt out shortly after the fire was built, and the roof of the large house took fire in the dry moss, from the burning soot falling upon it and quite a hole was burned through. We have attended meeting as usual. Mr. Pascoe preached from the text, "Is there no balm in Gilead? Is there no physician there?" - a good sermon. (T.S.R. 35. 2 P.M. 53. S.S. 43.)

Mar. 14. Monday. Such a heavy frost this morning that the potatoes in the front yard, eight or ten inches high, are leveled with the ground. We hope they are not entirely killed, also the fruit buds. I have written to Howard and received a letter from Ida. She has commenced her work in the Training school and is all discouraged, and as "blue" as well could be. She comes home from school at night to cry, and lie sleepless most of the night, and has lost her appetite for food. In this way she will soon be down sick. The Normal Students all seems to be afraid of Miss Titus - the Principal of the Training school, because she has a short sharp way of finding fault and scolding. We learn by telegraph that the Czar of Russia was asassinated yesterday on the street, in his carriage, by having bomb shells thrown at him, which mangled his body and soon caused his death. Now the Nihilists have succeeded in doing what they have so long tried to do. (T.S.R. 31. 2 P.M. 53. S.S. 45.)