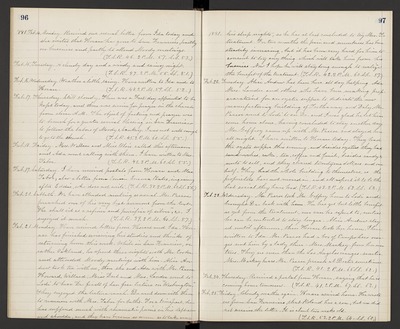 Feb. 17. Thursday. Still cloudy. There was a Fast day appointed to be kept today, and there was service for prayer in the church from eleven A.M. The object of fasting and prayer was to besuch for a greater revival blessing in San Francisco to follow the labors of Moody & Sankey. I was not well enough to go to the church. (T.S.R. 45. 2 P.M. 60. S.S. 55.)

Feb. 21. Monday. Have received letters from Horace and Ida. Horace has finished reviewing his studies and thinks of returning home this week. While in San Francisco, or rather Oakland, he spent three nights with Mr. Cooke and attended Moody meetings with him. Alice Andrew took tea with us, then she and Ada with Mr. Pascoe Howard, Willard, Miss Dart and Mrs. Lander went to Lodi to hear Dr. Jewell of San Jose lecture on "Washington". They enjoyed the lecture much. Dr. went down with them to remain with Mrs. Tabor for baths. For a time past, he has suffered much with rheumatic pains in his left arm and shoulder, and they have become so severe as to take away

1881. his sleep nights, so he has at last concluded to try Mrs. T.'s treatment. For two months the pain and numbness has been steadily increasing, but it has been very hard for him to consent to try anything which will take him from his business. Now I hope he will stay long enough to realize the benefit of the treatment. (T.S.R. 42. 2 P.M. 60. S.S. 57.)

Feb. 22. Tuesday. Alice Andrew has been here all day helping Ada Mrs. Lander and others who have been making preparations for an oyster supper to dedicate the new manufacturing building of Trethaway and Duly. Mr. Pascoe went to Lodi to see Dr. and I was glad he let him come home alone, having concluded to stay another day. Mr. Geffroy came up with Mr. Pascoe and stayed here all night I have written to Horace today. They had the oyster supper this evening, and besides oysters they had sandwiches, cake, tea, coffee and fruit, besides candy & nuts to sell, and they cleared twentyone dollars and one half. They had the whole building to themselves, as the proprietors have not moved in, and all report it to be the best social they have had. (T.S.R. 43. 2 P.M. 63. S.S. 62.)

Feb. 23. Wednesday. Mr. Pascoe took Mr. Geffroy home to Lodi and brought Dr. back with him. He has got but little benefit as yet from the treatment, nor can he expect to, unless he can be contented to stay longer. Alice Andrew stayed until afternoon, then Horace took her home. I have written to Ida. Mr. Pascoe had a box of Campo Seco oranges sent him by a lady there - Mrs. Mackay - from her own trees. They are nicer than the Los Angelos oranges - sweeter. Mrs. Mackay hears Mr. Pascoe preach at Dexter sometimes. (T.S.R. 41. 2 P.M. 65. S.S. 62.)