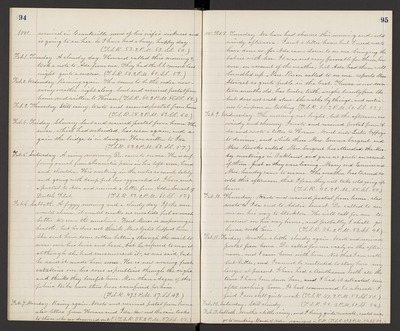 Feb. 5. Saturday. A rainy morning Dr. came to see me. He is suffering much from rheumatic pain in his left arm. hand and shoulder. His working in the water so much lately and going with damp feet has aggravated it. I have sent a postal to Ada and received a letter from Addie Smart of Dutch Flat. (T.S.R. 52. 2 P.M. 61. S.S. 53.)

Feb. 6. Sabbath. A foggy morning and a cloudy day. If the sun would shine, it would make us invalids feel so much better. We crave the sunshine. Fred Morse is improving in health, but he does not think Mrs. Yates helped him. She sent him some cotton batting through the mail to wear over his lives and head, but he refused to wear it although she had mesmerised it, as was said, but he said it made him worse. He is now wearing fresh catskins over his sores as poultices through the night and thinks they benefit him. More than a dozen of the feline tribe have thus been sacrificed for him. (T.S.R. 47. 2 P.M. 57. S.S. 49.)

1881. Feb. 8. Tuesday. We have had showers this morning and a cold windy afternoon. I sent a letter home but I need not to have done so, for Ada came down to see me bringing the babies with her. It was not very favorable for them, however, on account of the weather, but Ada had them well bundled up. Mrs. Rixon called to see me - reports Mrs. Stewart as quite feeble in the East. Theresa is now seventeen months old, has twelve teeth, weighs twentyfour lbs. but does not walk alone. She walks by things, and continues to improved in talking. (T.S.R. 55. 2 P.M. 60. S.S. 53.)

Feb. 9. Wednesday. The morning was bright, but the afternoon was windy and showery. I wrote and received postal from Ada and wrote a letter to Horace. Went into Sister Geffroy's to dinner, and while there Mrs. Emma Sargent and Mrs. Brooks called. Mrs. Sargent has attended the Moody meeting's in Oakland and gave us quite an account of them. Just as they were leaving, Mary and Eunice and Mrs. Sandoz came to see me. The weather has turned so cold this afternoon, that I fear they will take cold going up home.(T.S.R. 42. 2 P.M. 55. S.S. 50.)

Feb. 11. Friday. Weather a little cloudy again. Wrote and received postal from home. Dr. called for me early in the afternoon, and I came home with him. Not that I am well but better, and I cannot be contented to stay here any longer at present. I have had a troublesome tooth all the time I have been down here, and I had it extracted soon after reaching home. It had commenced to [?]. I find I am still quite weak. (T.S.R. 47. 2 P.M. 53. S.S. 50.)