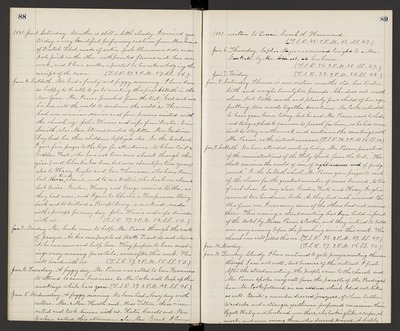 1881. Jan. 1. Saturday. Weather is still a little cloudy. I received yesterday a very beautifyl perfumery cushion from Mrs. Sarah of Dutch Flat, made of satin - pale blue on one side and pale pink on the other - with painted flowers on it her own work, and I have writte a postal to her acknowledging the receipt of the same. (T.S.R. 47. 2 P.M. 57. S.S. 56.)

Jan. 2. Sabbath. We had frosty and foggy morning. I have been so happy to be able to go to meeting this first Sabbath in the New Year. Mr. Pascoe preached from the text, "God sent not his Son into the world to condemn the world." &.c. Then we had communion service and four persons united with Smith, also Mrs. Stevens united by letter. Mrs. Gardiner Day had her three children baptized also. In the S. school I gave five prizes to the boys for attendance - to Chas. Coil & Gordon Forte, who have not been once absent through the year (and Charlie has been but once absent for two years) also to Harry Ingles and Geo. Thomason, who have been but twice times absent, and to our Willie, who has been absent but twice. Gordon, Harry and George received Bibles, as they had none, and I gave to Charlie a Temperance Story book and to Willard a Precept Diary - a new kind - made with a precept for every day. John Harris and wife dined with us. (T.S.R. 37. 2 P.M. 54. S.S. 50.)

Jan. 3. Monday. Mr. Cooke came to help Mr. Pascoe through the week of prayer. As his our people at Watts Tract do not observe it, he can come and help here. They propose to have meetings every evening for awhile, even after this week. He will board with us. (T.S.R. 37. 2 P.M. 55. S.S. 50.)

Jan. 5. Wednesday. A foggy morning. We have had a busy day with callers. Mr. & Mrs. Heath and Miss Tilton - their niece - called and took dinner with us. Katie Carroll and Mrs. Guhan called this afternoon; also Mrs. Grant. I have

Jan. 8. Saturday. Theresa is now sixteen months old, has twelve teeth and weighs twentytwo pounds. She does not walk alone, but talks much and plainly for a child of her age, putting two words together sometimes Mr. Cooke intended to have gone home today, but he and Mr. Pascoe went to Lodi and telegraphed to someone to preach for him, so he has come back to stay another week, and continue the meetings with Mr. Pascoe, as the interest increases. (T.S.R. 34. 2 P.M. 56. S.S. 50.)

Jan. 9. Sabbath. We have attended meeting today. Mr. Pascoe preached of the ministrations of the Holy Spirit, from the text, "He shall convince the world of sin, of righteousness and of judgment." In the Sabbath school, Mr. Pascoe gave prizes to each of the classes for the greatest number of verses learned, to two of each class. In my class, Gordon Foote and Harry Inglis received two handsome books. As they had each received Bibles from me, I was sorry some of the others had not received them. This evening, a street meeting has been held in front of the Hotel by Mssrs. Pascoe & Cooke, and they intend to hold one very evening before the preaching service this week. The church was well filled this eve. (T.S.R. 36. 2 P.M. 49. S.S. 49.)

Jan. 11. Tuesday. Cloudy. I have ventured to go to prayer meeting this eve though I am not well, but because of the interest I feel. After the street meeting, the people came to the church and Mr. Pascoe spoke very well from the parable of the Prodigal Son. Mr. Cooke followed in an address, which I did not like as well. Quite a number desired prayers of whom Esther Wardrobe and a stranger gentleman professed conversion. Annie Pygall Haley and husband were there, she looking like a corpse almost, and were among those who desired prayers. A deeply