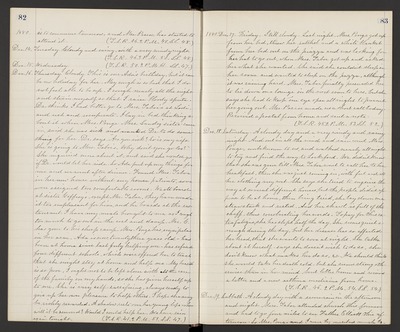 Dec. 16. Thursday. Cloudy. This is our Ada's birthday, but it can be no holiday for her. My cough is so bad that I do not feel able to be up. I cough nearly all the night and strain myself so that I raise bloody sputa. Dr. thinks I had better go to Mrs. Tabor's at Lodi, and rest and recuperate. I lay in bed thinking about it when Mrs. Ponge - Mrs. Sandoz' sister came in, said she was sick and wanted Dr. to do something for her. Dr. says "Are you sick? So is my wife. She is going to Mrs. Tabor's. Why don-t you got too?" She inquired more about it, and said she would go if Dr. would let her ride. So Ada put up my things for me and we went after dinner. Found Mrs. Tabor in her new house without any house patients, so we were assigned two comfortable rooms. We all board at sister Geffroy's. except Mr. Tabor, they have made it too unpleasant for him and he boards at the restaurant. I have my meals brought to me as I cough too much to go out in the wet and damp. Mr. G. has gone to his sheep camp. Mrs. Ponge has erysipelas in her arm. Ada is now twentythree years old - has been at home since last July helping me - has refused four different schools, which were offered her to teach that she might stay at home and help me. My health is so poor, I ought not to be left alone with all the care of the family on my hands, so she has given herself up to me. She is very self-sacrificing, always ready to give up her own pleasure to help others. I hope she may be richly rewarded. A shadow rests over her yourng life - when will it be removed? Would I could help her. We have rain again tonight. (T.S.R. 41. 2 P.M. 51. S.S. 47.)

1880. Dec. 17. Friday. Still cloudy. Last night, Mrs. Ponge got up from her bed, threw her satchel and a white blanket from her bed out on the piazza and was looking for her hat to go out, when Mrs. Tabor got up and asked her what she wanted. She said she couldn't sleep in her room and wanted to sleep on the piazza, although it was raining hard. Mrs. Tabor finally persuaded her to lie down on a lounge in the next room to hers, but she says she had to keep one eye open all night to prevent her going out. Mr. Pascoe made us a short call today. Received a postal from home and sent a note. (T.S.R. 45. 2 P.M. 53 S.S. 52.)

Dec. 18. Saturday. A cloudy day and a very windy and rainy night. And out in all the wind and rain went Mrs. Ponge, unbeknown to us, and walked nearly all night to try and find the way to Lockeford. We didn't know that she was gone till Mrs. Tabor went to call her to her breakfast, then she was just coming in, with feel and all her clothing very wet. She says she tried to enquire the way at several different houses, but the people didn't appear to be at home, then being tired, she lay down on a straw stack and rested. And her shawl is full of the chaff, thus corroborating her words. To pay for this extra fatigue, she has slept half the day. She seems quiet enough during the day, but her disease has so affected her head, that she wants to rove at night. She talks about it herself - says she doesn't wish to do so, she don't know what makes her do so, &.c. We should thinks she would take her death cold, but she seems strong otherwise than in her mind. Sent letter home and received a letter a new asthma medicine from home. (T.S.R. 46. 2 P.M. 54. S.S. 54.)

Dec. 19. Sabbath. A cloudy day with a severe rain in the afternoon and night. Mrs. Tabor attended church this forenoon and had to go four miles to see Father Elliott this afternoon. So Mrs. Ponge and I were by ourselves much today,