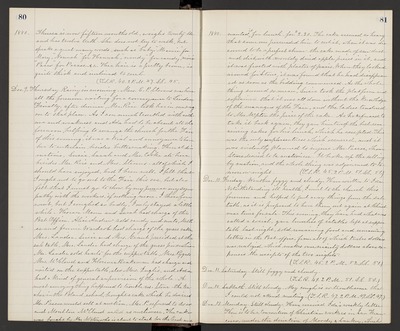 Dec. 9. Thursday. Rainy in morning. Mrs. E.P. Stevens was here all the forenoon waiting for a conveyance to Linden. Finally, after dinner, Mr. Rice took her in our wagon to that place. As I am much troubled with asthma and weakness and Ada had to be absent all the forenoon, helping to arrange the church for the Fair of this evening, it was a trial and annoyance to have her to entertain, besides buttermaking. Then at dinnertime, Susie, Sarah and Mr. Cooke ate here besides Mr. Rice and Mrs. Stevens - all of which I should have enjoyed, had I been well. I felt that I ought not to go to the Fair this eve, but also felt that I must go to show by my presence my sympathy with the workers, if nothing more. I therefore went, but I coughed so badly. I only stayed a little while. Horace Mann and Sarah had charge of the Post Office. Alice Andrew sold candy and nuts, Mother and Jennie Wardrobe had charge of the guess cake, Mrs. Lander, Susie and Mrs. Grand presided at the sale table, Mrs. Lander had charge pincushion. Mr. Lander sold hearts for the supper table, Mrs. Pygall Mrs. McCloud and Florence Brakeman had charge and waited on the supper table, also Mrs. Inglis', and Ada had a kind of general supervision of the whole. A most annoying thing happened to trouble us. Stone the teacher in the Poland school, brought a cake which he desired Mr. Pascoe would sell at auction. Mr. P. refused to do so and Moulton McCloud acted as auctioneer. The cake was bought by Mr. Upton, who is about to start for the East and

1880. wanted it for lunch for $2.30. The cake seemed so heavy that some one persuaded him to cut it, when it was discovered to be a perfect sham - the cake made of saw dust and dish with mouldy dried apple pieces in it, and it was frosted with plaster of paris. When they looked around for Stone, it was found that he had disappeared as soon as the bidding commenced. As the whole thing seemed so mean, Susie took the platform and explained that it was all done without the knowledge of the managers of the Fair, and the ladies tendered to Mr. Upton the price of the cake. As here refused to take it back again, they gave him two of the best remaining cakes for his lunch, which he accepted. This was the only unpleasantness which occurred, and it was evidently planned to injure Mr. Pascoe, whom Stone desired to be auctioneer. It broke up the selling by auction, and the whole thing was adjourned to tomorrow night. (T.S.R. 45. 2 P.M. 51. S.S. 51.)

Dec. 10. Friday. Weather foggy and cloudy. Have written to Ida. Notwithstanding ill health, I went to the church this forenoon and helped to put away things from the sale table, as it is proposed to have them out again at Christmas time for sale. This evening, they have had what was called a social, gave lunches of eatables left as supper table last night, sold remaining food and remaining letters in the Post office, from all of which twelve dollar was realized, which makes over ninety dollars above expenses the receipts of the two nights. (T.S.R. 45. 2 P.M. 52. S.S. 51.)

Dec. 13. Monday. Still cloudy. Have received Ida's weekly letter. There is to be a Convention of Christian workers in San Francisco under the direction of Moody & Sankey, which