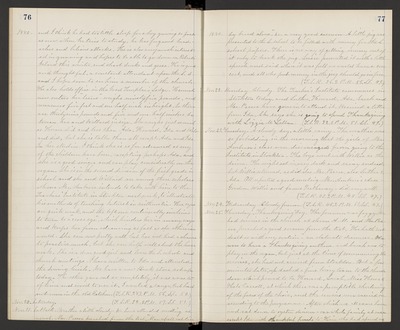 1880. and I think he had too little sleep for a boy growing so fast as now where he tries to study, he has frequent headaches and bilious attacks. He is also very much interested in gunning and hopes to be able to go down on Robert's Island this winter, and school ducks and geese. He is good and thoughtful, a constant attendant upon the S.S. and I hope soon to see him a member of the church. We also holds office in the Good Templar's Lodge. Hannah now enters her "teens" - weighs ninetyfive pounds, and measures five feet and one-half inch in height. So there are thirtynine pounds and five and one-half inches between her and Willard in size. She weighs just as much as Horace did and less than Ada, Howard, Ida and Willard did, but she is taller than all except Ada and Ida. In her studies, I think she is far advanced as any of the children have been, excepting perhaps Ada, and she is a good singer and can play considerably on the organ. She is in the second division of the first grade in school and she and Willard are among those scholars whom Mr. Ambrose intends to take with him to the Teachers' Institute in Stockton next week, to illustrate his methods of teaching Interest in arithmetic. Her eyes are quite weak, and the left one continually inclines to turn a "cross eye", which hinders her in many ways and keeps her from advancing as fast as she otherwise would. She can sew pretty well but has not had a chance to practice much, but she can help well about the house work. She is a dear good girl and loves the S. school and church meetings. I have written to Ida and attended the Sewing Circle. We have a new Buck stove set up today. The other gave out so completely, it was a waste of time and wood to use it. I wanted a range, but had not room in the old kitchen. (T.S.R. 28. 2 P.M. 56. S.S 50.)

Nov. 21. Sabbath. Weather a little cloudy. We have attended meeting as usual. Mr. Pascoe preached from the text, "Man shall not live

1880. by bread alone," &c, a very good sermon. A little jug was presented to the S. school to be filled with money for the S. school papers. There is no way of getting money out of it only to break the jug. Susie presented it with a little speech, and said when it was full we would have a concert, and all who put money in the jug shouuld go in free. (T.S.R. 26. 2 P.M. 55. S.S. 49.)

Nov. 22. Monday. Cloudy. The Teacher's Institute commences in Stockton today, and Luther, Howard, Ada, Sarah and Mr. Pascoe have gone into attend it. Received a letter from Ida. She says she is going to spend Thanksgiving with Lizzie McLellan. (T.S.R. 32. 2 P.M. 51. S.S. 49.)

Nov. 23. Tuesday. A cloudy day, a little rainy. The weather was so forbidding in the morning that the girls of Mr. Ambrose's class were discouraged from going to the Institute in Stockton. The boys went with Wille as the driver. The night set in very dark and rainy indeed, but Willie returned, as did also Mr. Pascoe, also Luther & Ada. All reported a good meeting. Mr. Ambrose's class - Gordon, Willie and James Trethaway - did very well. (T.S.R. 43. 2 P.M. 48. S.S. 47.)

Nov. 25. Thursday. Thanksgiving Day. The forenoon was foggy. We had services in the church at eleven A.M. and Mr. Pascoe preached a good sermon from the text, "He hath not dealt so with any nation" - an elaborate discourse. We were to have a Thanksgiving anthem, and Sarah was to play on the organ, but just at the time of commencing the services, she had not arrived from Stockton. But a few minutes later, up dashed a fine livery team to the church door which proved to be Howard, Sarah, Miss Howe & Kate Carroll, at which there was a perceptible shortening of the faces of the choir, and the services were carried on according to the programme. After which we all came home and sat down to oyster dinner - our whole family at once except Ida with thankful hearts to Him who had shared us