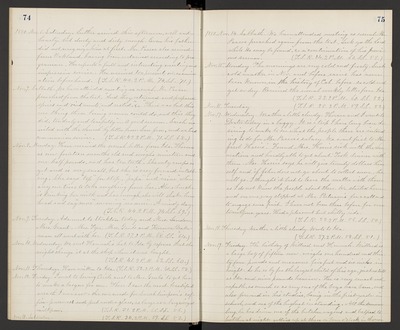 1880. Nov. 6. Saturday. Luther arrived this afternoon, well and hearty, but dusty and dirty enough. Even his father did not recognize him at first. Mr. Pascoe also arrived from Oakland, having been ordained according to programme. He reports a full and interesting meeting and impressive service. He received 100 percent, on examination before hand. (T.S.R. 44. 2 P.M. 74. S.S. 71.)

Nov. 7. Sabbath. We have attended meeting as usual. Mr. Pascoe preached from the text, "And they returned and prepared spices and ointments, and rested," &.c. "There was but this one thing those loving women could do, and this they did, tenderly and tearfully" - a good sermon. Sarah invited with the church by letter from San Jose, and we had communion service. (T.S.R. 42. 2 P.M. 71. S.S. 68.)

Nov. 8. Monday. Have received the usual letter from Ida. Theresa is now fourteen months old and weighs nineteen and one-half pounds, and has ten teeth. She only creeps as yet and is very small, but she is very forward in talking. She says "top" for stop, "papa" and "mine" when any one tries to take anything from her. Also when she is drinking her milk and has enough she will shake her head and say "more" meaning "no more". A windy day. (T.S.R. 44. 2 P.M. 74. S.S. 69.)

Nov. 17. Wednesday. Weather a little cloudy. Horace and I went to Dexter today in a buggy. It is a trip I have long been desiring to make to see what the people there are intending to do for Mr. Pascoe's salary. We went first to Mrs. Jacob Harris. Found Mrs. Harris sick with the rheumatism and hardly able to get about. Took dinner with them. Mr. Harris says he will give twenty dollars himself and if John does not go about to collect more, he will go. I thought it best to leave the matter with them as I do not know the people about there. We started home and on our way stopped at Mr. Putnam's for a call and to engage some fruit. I have not been there before for over twentyone years. Had a pleasant but chilly ride. (T.S.R. 28. 2 P.M. 56. S.S. 50.)

Nov. 19. Friday. The birthday of Willard and Hannah. Willard is a large boy of fifteen now weighs one hundred and thirtyfour pounds and measures five feet and six inches in height. So he is by far the largest child of his age, just as tall as Ida and nine pounds heavier. He is very smart and capable, as much so as any one of the boys have been, and also forward in his studies, being in the first grade in school, and one of the highest in standing. All the summer long, he has driven one of the butcher wagons and helped to butcher at night, getting up at three or four o'clock in the morn