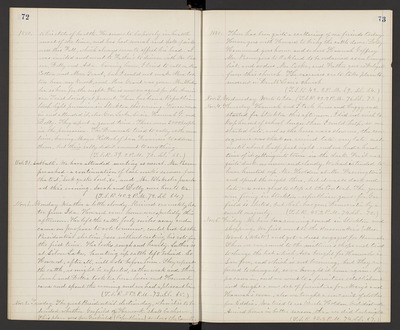 1880. to his state of health. He seems to be poorly in health most of the time, and has had several hard spells of sickness this Fall, which always seem to affect his head. I was invited and went to Father's to dinner with Mr. Pascoe, Dolly and Ada. Coming home, I tried to call on Mrs. Cotton and Mrs. Grant, but I could not make Mrs. Cotton hear my knock and Mrs. Grant was gone. Mr. Blakeslee is here for the night. He is now an agent for the American Track Society at present. There has been a Republican torch light procession in Stockton this evening. Horace went in and attended it, also Geo. Locke, Susie, Hannah G. and Dolly. They report a grand time. There were 3000 people in the procession. The Democrats tried to rally at the same time, having Mayor Kalloch of San Francisco to address them, but their rally didn't amount to anything. (T.S.R. 39. 2 P.M. 70. S.S. 66.)

Nov. 1. Monday. Weather a little cloudy. Received our weekly letter from Ida. Howard came home unexpectedly this afternoon. He left the cattle forty miles away and came on purpose to vote tomorrow, could not let the Presidential election pass without casting his vote for the first time. He looks rough and hearty. Luther is at Silver Lake, hunting up cattle left behind. So Howard, after all, will vote before him. They report the cattle, as might be expected, rather weak and thin. Sarah and Dollie took tea here. Susie and Hannah came and spent the evening and we had a pleasant time. (T.S.R. 55. 2 P.M. 73. S.S. 65.)

Nov. 2. Tuesday. The great Presidential election day, whom it is to be decided whether Garfield or Hancock shall be chosen. This place goes for Garfield (Republican) so does the County.

1880. There has been quite a scattering of one friends today. Horace goes with Howard to bring the cattle down. Dolly Hammond goes home and so does Hannah Geffroy. Mr. Pascoe goes to Oakland to be ordained as a Evangelist, and so does. Mr. Cooke, and Father goes as Delegate from this church. The exercises are to take place tomorrow in Dr. McLean's church. (T.S.R. 42. 2 P.M. 69. S.S. 64.)

Nov. 4. Thursday. Hannah and I took horse and buggy and started for Stockton this afternoon. I did not wish to keep her out of school longer than I could help, so we started late, and as the horse was a slow one, the consequence was that we arrived late - very late - not until about half past eight and we had a hard time of it getting into town in the dark. For it was quite dark - no moon and cloudy. We had intended to have hunted up Mr. Holden at Mr. Farrington's and spent the night there, but it was so dark and late, we were glad to stop at the Central. The guns were firing in Stockton - republican guns - for Garfield is elected, but Cal. has gone Democratic by a small majority. (T.S.R. 45. 2 P.M. 74. S.S. 70.)

Nov. 5. Friday. We have been running round in Stockton and shopping. We first went to the dressmaker's (Mrs. Wood & White) and got a dress engaged for Hannah. Then we ran round to the millinci's shops and tried to change the hat which Ada bought for Hannah in San Jose, and which is not becoming, but they refused to change it, so we brought it home again. Papa came in, and we went to a furniture establishment and bought a new set of furniture for Mary's and Hannah's rooms, also we bought a new suit of clothes for Eddie. We tried to see Uncle Holden but did not. Arrived home in better season, than we did last night. (T.S.R. 43. 2 P.M. 74. S.S. 67.)