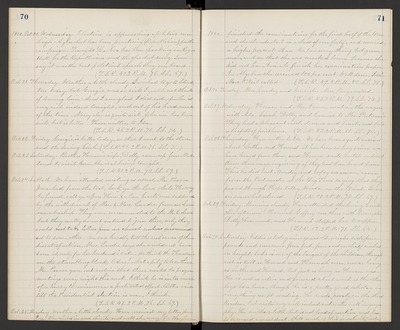 1880. Oct. 20. Wednesday. Election is approaching - politics run high. A glee club has been practicing (Republican) for the campaign. Tonight Dr. Cox has been speaking in Rogers Hall for the Republicans and the glee club sung. Some say it was the best political speech they ever heard. (T.S.R. 42. 2 P.M. 76. S.S. 67.)

Oct. 21. Thursday. Weather a little cloudy. I wished to go to Stockton today, but Georgie was so sick I could not think of leaving him. And I am glad I did not, for he is very sick indeed tonight, and out of his head most of the time. Mary also is quite sick. Johnnie has been sick, but is better. Have written to Ida. (T.S.R. 46. 2 P.M. 76. S.S. 74.)

Oct. 24. Sabbath. We have attended meeting as usual. Mr. Pascoe preached from the text, "Seek ye the Lord while He may be found, call ye upon Him", &c Our hearts were saddened by the withdrawal of Mr. & Mrs. Lander from our church membership. They were recommended to the M.E. church but they really do not intend to join there, only they could not take letter from one church unless recommended to some other. We can hardly tell the real cause of their dissatisfaction. Mrs. Lander says she would not have done it, only for her husband's sake. We think the Thomson's are the stumbling block. O dear! what a pity to lose them. Mr. Pascoe gave out notice that there would be prayer meetings every night this week. I think he is in too much of a hurry to commence a protracted effort. Beter wait till the Presidential election is over. I think. (T.S.R. 47. 2 P.M. 76. S.S. 69.)

Oct. 25. Monday. Weather a little cloudy. Have received my letter from Ida. She writes in good spirits, and well she may, for they have

1880. finished the examinations for the first half of the term and she stands No. 3 in a class of over forty, and received a higher percent than No. 1 in everything but grammar, and on that she was marked lower because she did not have time to finish her examination paper. In Algebra she received 100 percent. Well done, Ida! Mrs. O'Neil called. (T.S.R. 49. 2 P.M. 80. S.S. 73.)

Oct. 28. Thursday. Have written to Ida. We had become quite anxious about Luther and Howard - it has been so long since we have heard from them, and Horace wrote postals and sent them three ways, inquiring if they had been heard from. This he did last Monday, and today an answer came from the Postmaster at the Big Trees, saying that they passed through Hope Valley, Nevada, on the 18 inst. So we are somewhat relieved. (T.S.R. 50. 2 P.M. 73. S.S. 67.)

Oct. 30. Saturday. Eddie is today nine years old, weighs sixtyfour pounds and measures four feet, four and onehalf inches in height. So he is one of the largest of the children, though not as tall as Howard and Hannah were, nor as heavy as Luther and Howard, but just as heavy as Horace was. He is not as active and forward about work as the other boys have been, though he is a pretty good scholar in everything except reading. He reads poorly in the third Reader, but writes very well indeed, and writes well in geography. He milks a little, but is not fond of exertion and has to be urged a great deal. Still much of this inactivity is due