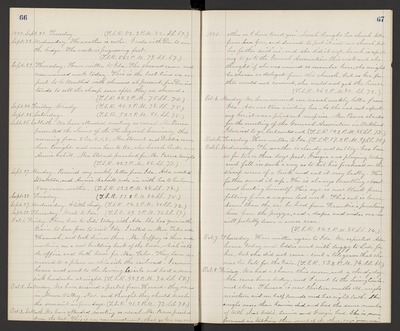 Sept. 23. Thursday. Have written to Ida. The shearers came and commenced work today. This is the last time we expect to be troubled with shearers at present, for Dr. intends to sell the sheep soon after they are sheared. (T.S.R. 48. 2 P.M. 75. S.S. 70.)

Oct. 1. Friday. I have been to Lodi today with Ada. She has gone on the train to San Jose to visit Ida. I called on Mrs. Tabor and Hannah, and took dinner there. Mr. Geffroy is there and working on a new building back of the house, which is to be office and bath house for Mrs. Tabor. They have removed to a place on this side the railroad. I came home and went to the Sewing Circle and had a severe sick headache at night. (T.S.R. 48. 2 P.M. 74. S.S. 68.)

Oct. 3. Sabbath. We have attended meeting as usual. Mr. Pascoe preached from the text, "This is my commandment, that ye love one another

1880. as I have loved you." Sarah brought her church letter from San Jose, and desired to put it into our church, but her father said "no", and she did it not. Sarah is expecting to go to the General Association this week and she thought if she was received as member here, she might be chosen as delegate from this church, but as her father would not consent, she could not get the honor. (T.S.R. 46. 2 P.M. 80. S.S. 72.)

Oct. 4. Monday. We have received our usual weekly letter from Ida. Ada was there visiting her. As she was not expecting her, it was a pleasant surprise. Mr. Pascoe started for the meeting of the General Association in Oakland. I desired to go, but could not. (T.S.R. 50. 2 P.M. 85. S.S. 73.)

Oct. 6. Wednesday. The weather is cloudy and sultry - has been so for two or three days past. Georgie was playing today and fell in such a way as to hit his forehead on the sharp corner of a brick and cut it very badly. His father served it up. He is always tumbling about and hurting himself. His eyes is now black from falling from a wagon last week. This cut is lower down than the one he had from Frankie's pushing him from the piazza, and a deeper and wider one so will probably leave a worse scar. (T.S.R. 54. 2 P.M. 85. S.S. 74.)

Oct. 8. Friday. We had a shower this morn, and a cloudy day. Ada came home today, and I went to the Sewing Circle, and store. Theresa is now thirteen months old, weighs nineteen and one-half pounds and has eight teeth. She weighs more than Eunice did, and has the same number of teeth that Eddie, Eunice and Georgie had. She is more forward in talking than most of the others, says "mamma",