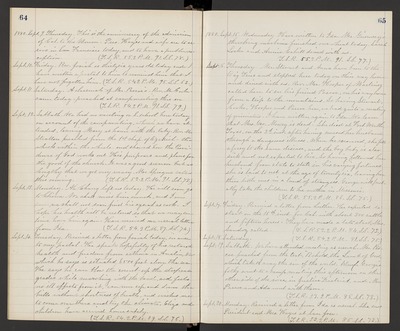 Sept. 12. Sabbath. We had no meeting on S. school here today on account of the camp meeting, which we have attended, leaving Mary at home with the baby. Rev. Mr. Stralton preached from the 1st chap. of Ezekiel - the wheels within the wheels - and showed how the Providence of God works out His purposes and plans for the good of the church. It was a good sermon but so lengthy that we got very weary. Mr. Sprague called this evening. (T.S.R. 52. 2 P.M. 91. S.S. 78.)

Sept. 14. Tuesday. Received a letter from Josiah today, in answer to my postal. He speaks hopefully of his restored health and freedom from asthma in Austin, Nev. which he says is situated 6500 feet above the sea. He says he can blow the cornet up the steepest grades while marching with the band, and feels no ill effects from it, can run up and down the hills without shortness of breath, and wishes me to come over there and try the climate. Eliza and children have arrived home safely. (T.S.R. 54. 2 P.M. 89. S.S. 76.)

Sept. 16. Thursday. Mr. Stewart and Anna have been to the Big Trees and stopped here today on their way home and dined with us. Rev. Mr. Hooper of Martinez called here to see his friend Pascoe, on his way home from a trip to the mountains. So having Stewart, Cooke, Hooper and Pascoe here, we had quite a meeting of ministries. I have written again to Ida. We learn that Mrs. Geo. Mowry is dead. She died at Fort Worth, Texas, on the 2d inst. after having nursed her husband through a dangerous illness. When he recovered, she fell a prey to the same disease, and the boy baby is also sick and not expected to live. So having followed her husband from state to state in his varying fortunes she is laid to rest at the age of twenty six, leaving her three little ones in a land of strangers. George will probably take the children to her mother in Missouri. (T.S.R. 55. 2 P.M. 86. S.S. 75.)

Sept. 19. Sabbath. We have attended meeting as usual. Mr. Pascoe preached from the text, "Behold the Lamb of God which taketh away the sin of the world." Uncle George's folks went to a camp meeting this afternoon on the other side of the river, in Justice District, and Mr. Pascoe and Ada went with them. (T.S.R. 53. 2 P.M. 85. S.S. 73.)