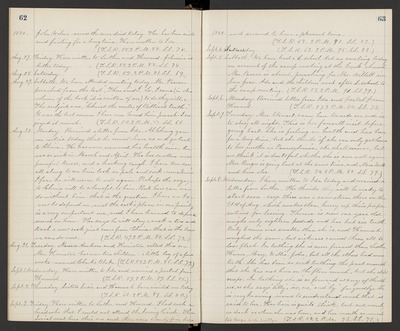 Aug. 30. Monday. Received a letter from Ida. Ah Chang gave me notice today that he must have us and go back to China. He has never recovered his health since he was so sick in March and April. He has swollen and painful knees, and a hacking cough. I have been sore all along to see him look so pale and sick - sometimes I fear he will never be well again. Perhaps the voyage to china will be a benefit to him. But how can we do without him - that is the question. I have no Ida now to depend on, and the cook's place in our family is a very important one, and I have learned to depend much on him. He says he will stay a week or two and teach a new cook just come from China - that is the best we can do now. (T.S.R. 47. 2 P.M. 80. S.S. 72.)

Sept. 3. Friday. Have written to Luther and Howard. I had such a headache that I could not attend the Sewing Circle. The Social met here this eve and there were twenty five here

Sept. 7. Tuesday. Mrs. Stewart came here towards eve and is to stay all night. This is her farewell visit before going East. She is failing in health and has been for a long time, but she thinks if she can only get home to her mother in Pennsylvania, she shall recover, but we think it is doubtful whether she is ever well again. Mrs. Ringer is going East at the same time, and Mrs. Scott and Cora also. (T.S.R. 54. 2 P.M. 88. S.S. 79.)

Sept. 8. Wednesday. I have written to Ida today and received a letter from Luther. He thinks they will be ready to start soon - says there was a snow storm there on the 31st of Aug. which makes them hurry up their preparations for leaving. Theresa is now one year old - weighs only eighteen pounds and has but six teeth. Only Eunice was smaller than she is, and Hannah weighed the same, but sickness caused them all to lose flesh. In teething she is more forward than Luther, Horace, Mary, Willie, John, but all the others had more teeth. She has been so sick teething the past month that she has not been on the floor much, but she still creeps. In talking she is as forward as any of the others, as she says "titty", "no, no," and "by" for goodbye. She is very knowing - seems to understand much that is said to her. Her hair is quite thick, but not nearly as dark as when she was born, and her mouth in much too large to be pretty. (T.S.R. 58. 2 P.M. 95. S.S. 79.)