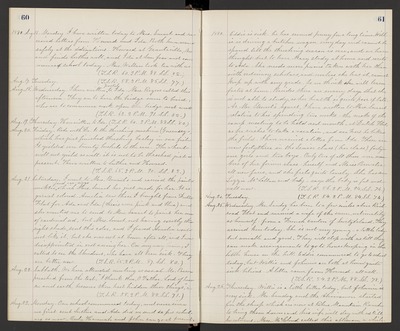 1880. Aug. 16. Monday. I have written today to Mrs. Smart and received letters from Howard and Ida. Both have arrived safely at the destinations. Howard at Grantsville, Nev. and finds Luther well, and Ida at San Jose and commenced school today. Mrs. Wallace took tea with us. (T.S.R. 60. 2 P.M. 88. S.S. 82.)

Aug. 20. Friday. Rode with Dr. to the threshing machine (Guernsey) which has just finished threshing barley in our field. It yielded over twenty bushels to the acre. The wheat will not yield as well - it is not be threshed just at present. Have written to Luther and Howard. (T.S.R. 65. 2 P.M. 90. S.S. 83.)

Aug. 21. Saturday. I went to Mrs. Bruml's and carried the painted necktie and ear-rings which Mrs. Smart has just made for her. It is garnet colored. Amelia saw those I brought from Dutch Flat for Ada and Ida (their's were pink and blue) and she wanted me to send to Mrs. Smart to paint her one of cardinal red, but Mrs. Smart, not having exactly the right shade, sent this color, and I feared Amelia would not like it, but she was not at home after all, and I was disappointed in not seeing her. On my way home, I called to see the Shudens, who have all been sick. They are better now. (T.S.R. 65. 2 P.M. 87. S.S. 80.)

Aug. 23. Monday. Our school commenced today, and never since we first sent Luther and Ada did we send so few scholars as now. Only Hannah and John can go at present.

1880. Eddie is sick - he has seemed puny for a long time. Willie is driving a butcher wagon everyday and cannot be spared till the threshing season is over, and we have thought best to have Mary study at home and recite to Ada. She needs more pains taken with her than with ordinary scholars, and unless she has it, cannot keep up with any grade. So we think she will learn faster at home. Besides there are many days that she is not able to study, as her health is quite poor of late. As Mr. Stewart's request, I have written to Mrs. Smart relative to his spending two weeks - the weeks of the camp meeting to be held next month - at Dutch Flat, as he wishes to take a vacation, and see how he likes the field. I have received a letter from Ida. These are now fortythree in the Senior class (her class) fortyone girls and two boys. Only two of all these were members of her former class - herself and Miss Brewster - all new faces, and she feels quite lonely. She has seen Lizzie McLellan and baby - says the baby is fat and well now. (T.S.R. 56. 2 P.M. 84. S.S. 74.)

Aug. 25. Wednesday. Mr. Sandoz has been to a few miles above Railroad Flat and married a wife of the same nationality as himself - from a French canton of Switzerland. They arrived here today. She is not very young - a little lady but amiable and good. They will stop with us till they can make arrangements to go to housekeeping in the little house on the hill. Eddie commenced to go to school today, but Willie and Johnnie are both at home quite sick-bilious. A letter came from Howard - all well. (T.S.R. 54. 2 P.M. 88. S.S. 78.)

Aug. 26. Thursday. Willie is a little better today, but Johnnie is very sick. Mr. Sandoz and the Chinamen started for the sheep which are now at Blue Mountain Ranch to bring them down, and his wife will stay with us till he returns. Mrs. McCloud called this afternoon a while.