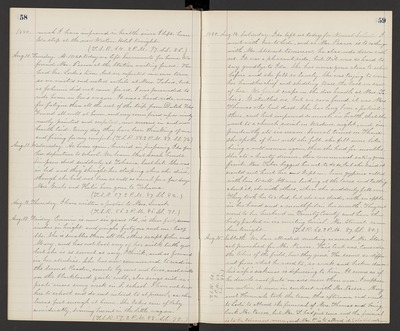 Aug. 10. Tuesday. At 10:40 today we left Sacramento for home. We found Mr. Pascoe at the Station waiting for us. He had Geo. Locke's team, but we expected our own team so we waited and rested awhile at Mrs. Tabor's, but as Johnnie did not come for us, I was persuaded to ride home in Geo's wagon. It was a hard ride, worse for fatigue than all the rest of the trip from Dutch Flat Found all well at home, and my room fixed up so nicely newly-painted and carpeted, new screens in and new hearth laid. Every day they have been thinking of me and fixing for my comfort. (T.S.R. 58. 2 P.M. 87 S.S. 78.)

Aug. 11. Wednesday. At home again, hurried in preparing Ida for her departure to school. We learn that Sarah Carroll Simpson died suddenly at Tehama last Sat. She was in bed and they "thought her sleeping when she died", though she had not been as well as usual for a few days. Mrs. Grubs and Katie have gone to Tehama. (T.S.R. 57. 2 P.M. 87. S.S. 82.)

Aug. 13. Friday. Eunice is now six years old, is three feet, seven inches in height and weighs forty one and one-half lbs. She is smaller than all the others except John and Mary, and has not lost any of her milk teeth yet but she is as smart as any, I think, and as forward in her studies. She has now commenced to read in the Second Reader, counts by ones and twos, and writes on the blackboard quite well, also sings and repeats verses every week in S. school. I have not sent her to school and do not intend to at present, as she learns fast enough at home. She takes care of baby considerably, drawing her out in the little wagon. (T.S.R. 37. 2 P.M. 83. S.S. 78.)

1880. Aug. 14. Saturday. Ida left us today for Normal School. I went with her to Lodi, and as Mr. Pascoe is to exchange with Mr. Stewart tomorrow, he also rode down with us. It was a pleasant ride, but O it was so hard to say goodbye to Ida. She has never gone alone to school before and she felt so lonely. She was trying to wave her handkerchief and shedding tears, the last we saw of her. We found crape on the door handle at Mrs. Tabor's. It startled us, but we soon found it was Mrs. Thomas who had died. She has long been a patient there, and had improved so much in health, that she went to a church social on Wednes. night, and imprudently ate ice cream. Several times on Thurs. she spoke of how well she felt - she felt more like being a well woman again, than she had for months. She ate a hearty dinner, then commenced eating green fruit. Mrs. Tabor begged her not to do so, but she said it would not hurt her and kept on. Some gypsies called with lace to sell. All were looking at the laces and talking about it, she with others, when she suddenly fell over. They took her to a bed, but she was dead, with an apple in her hand and a mouthful in her mouth. They sent word to her husband in Trinity County and have the body packed in ice awaiting burial. Mr. Stewart came here tonight. (T.S.R. 60. 2 P.M. 87. S.S. 80.)

Aug. 15. Sabbath. We have attended meeting as usual. Mr. Stewart preached for Mr. Pascoe. His text was, "Consider the likes of the field, how they grow." He seems so different from what he used to, so weak and broken down his wife's sickness is depressing to him. It seems as if he drawls and puts on airs more than even. I suppose we notice it more in contrast with Mr. Pascoe. Mary and Hannah took the team this afternoon and went to Lodi to attend the funeral of Mrs. Thomas and bring back Mr. Pascoe, but Mr. T. had just come and the funeral is to be tomorrow morn, and Mr. P. is to attend it. So he did not come. (T.S.R. 60. 2 P.M. 88. S.S. 82.)