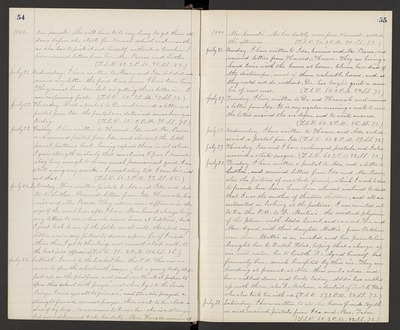 July 23. Friday. I have written to Howard, Ida and Mr. Pascoe and received postal from Ida, and she sent the little panel patterns back, having copied them in oil colors. I gain strength so slowly that sometimes I fear I cannot stay long enough to do much permanent good. I am still using my smoke - I must stay till I can live without that. (T.S.R. 66. 2 P.M. 99. S.S. 85.)

July 24. Saturday. Have written postals to Ada and Ida and letter to Luther. Received letters from Ida, Hannah, Eunice and Mr. Pascoe. They will see some difference in the size of the mail here, after I leave. Mrs. Smart always brings my letters to me whom she comes home at bedtime, but I just look to see if the folks are all well, then put my letters under my pillow to dream upon, for if I read them then, I get to thinking and cannot slept well. O the heat is so oppressive (T.S.R. 76. 2 P.M. 104. S.S. 86.)

July 25. Sabbath. I went to the S. school here this P.M. There was no man to open the school with prayer, but a young lady stepped up on the platform and said, "we think it proper to open this school with prayer", and when I get to the Lords' Prayer I wish you all to join in," and then she prayed a straight forward, earnest prayer, then went to her class - a class of big boys. No one seems to know her - she is stranger but seems determined to do her duty. Mrs. Knight - a cousin of

July 26. Monday. I have written to Ida, Eunice and Mr. Pascoe, and received letters from Howard, & Horace. They are having a hard time with the horses at home. Eleven have died of the distemper, most of them valuable horses, and as they could not do without, Dr. has bought quite a number of new ones. (T.S.R. 60. 2 P.M. 84. S.S. 71.)

July 30. Friday. I have written a postal to Ada and a letter to Luther, and received letters from Ida and Mr. Pascoe, also the pictures of our whole family, which I wish to show to friends here. Some have been almost inclined to doubt that I was the mother of thirteen children, and all are interested in looking at the pictures. I was invited out to tea this P.M. to Dr. Martin's - the resident physician of the place - with Addie Smart, and we went - Dr. and Mrs. Agard, with their daughter Mattie, from Oakland were there. Mattie is on invalid and her parents have brought her to Dutch Flat, hoping that a change of air will restore her to health. Dr. Agard himself has formerly been much benefited by this air. They are boarding at present at Alta - three miles above - and have walked down and back today. Addie has walked up with them, also Dr. Wilson, a dentist of Dutch Flat, who also took tea with us. (T.S.R. 57. 2 P.M. 84. S.S. 72.)