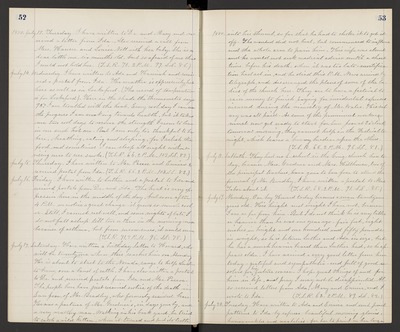 July 14. Wednesday. I have written to Ada and Hannah and received a postal from Ida. The weather is oppressively hot here as well as in Lockeford. (The record of temperature is for Lockeford). Here in the shade the thermometer says 96-. I am troubled with heat. Every cool day I can see the progress I am making towards health, but it takes me two cool days to recover the strength I seem to lose in one such hot one. But I am only too thankful to be here, breathing, eating and sleeping, for I relish the food, and sometimes I can sleep all night without rising once to use smoke. (T.S.R. 66. 2 P.M. 103. S.S. 83.)

July 16. Friday. I have written to Luther and a postal to Ida and received postal from Dr. and Ada. The heat is very oppressive here in the middle of the day, but soon after 4 P.M. we notice a great change - it grows so much cooler. Still, I cannot rest well, and some nights of late, I do not fall asleep till two or three in the morning - not because of asthma, but from nervousness, it would seem. (T.S.R. 71. 2 P.M. 96. S.S. 75.)

July 17. Saturday. Have written a birthday letter to Howard, who will be twentyone when this reaches him on Monday. He is about to start to the Nevada range to help Luther to bring over a band of cattle. I have also written a postal to Dr. and received postals from Ida and Mr. Pascoe. The people here have just received notice of the death in San Jose, of Mr. Bradley, who formerly resided here. He was a partner of Mr. Gardner's, in days gone by, and a very wealthy man. Walking in his back yard, he tried to catch a wild kitten, when it turned and put its teeth

1880. into his thumb, so far that he had to choke it to get it off. The wound did not heal, but commenced to inflame and the whole armto pain him. His wife was absent and he would not seek medical advice until a short time before his death, when it was too late - mortification had set in, and he died this P.M. News arrived by telegraph, and disarranged the plans of some of the ladies of the church here. They are to have a festival to raise money to finish paying for incidental expenses incurred during the ministry of Mr. Wales. His salary was all paid. As some of the prominent workers must now get ready to start for San Jose at 3 o'clock tomorrow morning, they cannot help in the Festival tonight, which leaves a heavy burden upon the others. (T.S.R. 66. 2 P.M. 96. S.S. 81.)

July 19. Monday. One boy Howard today becomes a man twentyone years old. His height and weight I have not, because I am so far from him. But I do not think he is any taller or heavier than he was one year ago - five feet, eight inches in height and one hundred and fifty pounds in weight, so he is between Luther and Ada in size, but he has a much heavier beard that Luther had, so he appears older. I have received a very good letter from him today - grateful and sympathetic - and full of good resolves for his future course. I hope great things of and for him in life, and pray I may not be disappointed. Also received letters from Ada, Mary and Eunice, and I wrote to Ida. (T.S.R. 62. 2 P.M. 89. S.S. 82.)

July 20. Tuesday. Have written to Ada and Eunice and sent panel patterns to Ida by express - beautiful morning - glories, honey suckles and wax lilies - for her to paint on her large