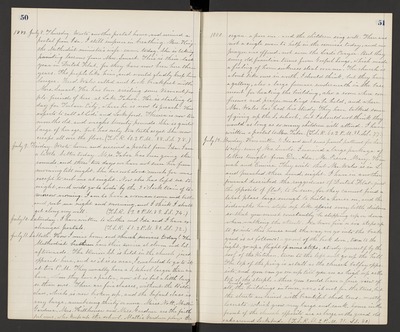 1880. July 8. Thursday. Wrote another postal home, and received a postal from Ida. I still improve in breathing. Mrs. King - the Methodist minister's wife came today. She is taking painting lessons from Mrs. Smart. This is their last year in Dutch Flat, for they have now been here three years. The people like him, and would gladly keep him longer. Fred Wales called and took breakfast with Mrs. Smart. He has been visiting some Vermount people - friends of hers - at Lake Tahoe. He is starting today for Tulare City, where he is now to preach. He expects to call at Lodi and Lockeford. Theresa is now ten months old, and weighs twenty pounds. She is quite large of her age, but has only two teeth as yet. She now creeps all over the floor. (T.S.R. 60. 2 P.M. 88. S.S. 78.)

July 9. Friday. Wrote home and received a postal from Ida. I am a little better today. Mrs. Tabor has been going the rounds and these two days we have not seen her from morning till night. She has not done much for me except to rub me at night. Now she has left us tonight, and will go to Lodi by the 3 o'clock train of tomorrow morning. I am to have a woman come and bathe and rub me night and morning, and I think I shall get along very well. (T.S.R. 59. 2 P.M. 83. S.S. 74.)

July 11. Sabbath. How I miss home and church services today! The Methodist brethren have their service at eleven and S.S. afterwards. The Union S.S. is held in the church just opposite here, and as it is so near, I conclude to go to it, at two P.M. They usually have a S. school larger than we have, when they a pastor, now it is but a little larger than ours. There are five classes, without the Bible class, which is now broken up, and the Infant class is very large, numbering thirty or more. Miss Nott, Mattie Gardner, Mrs. Hillhouse and Mrs. Gardner are the faithful ones, who keep up the school. Mattie Gardner plays the

1880. organ - a poor one - and the children sing well. There was not a single man to help in the exercises today, and no prayer was offered, not even the Lord's Prayer. But they sung old, familiar tunes from Gospel Songs, which made a feeling of homesickness steal over me. The church is about like ours in worth, I should think, but they have a gallery, also a large furnace underneath in the basement for heating the building, also a room where conference and prayer meetings can be held, and where Mr. Wales has been his study. They have talked some of giving up the S. school, but I should not think they would as long as so many children will attend. I have written a postal to Mrs. Tabor. (T.S.R. 60. 2 P.M. 81. S.S. 77.)

July 12. Monday. Have written to Ida and sent some panel patterns for her to copy - some of Mrs. Smart's. I received a large package of letters tonight from Dr. Ada, Mr. Pascoe, Mary, Hannah and Eunice. They write that Mr. Wales is in L. and preached there Sund. night. I have in another journal described the ruggedness of Dutch Flat - just the opposite of flat, to be sure, for they cannot find a level place large enough to build a house on, and the sidewalks have step up like stairs every little distance so that you must constantly be stepping up or down when walking the streets. We have five or six steps up to go into this house and the way we go into the back yard is as follows: go out of the back door, turn to the right, go up a flight of nine steps, steady yourself by the roof of the kitchen, turn to the left and go up the hill. The top of the pring is as tall as the church belfry opposite, and you ca go on up till you are as high up as the top of the steeple - there you could have a fine view of all nearly all the buildings in town, were it not for trees, but the streets are lined with beautiful shade trees - mostly locusts - which grow very large and rank. Some in the front of the church opposite are as large as the grand old oaks around Lockeford. (T.S.R. 61. 2 P.M. 91. S.S. 80.)