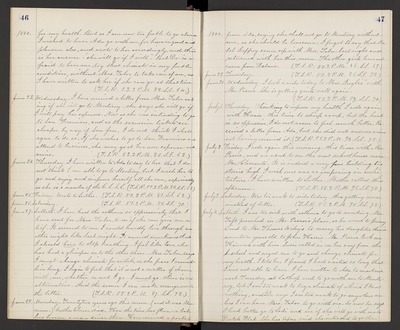 June 23. Wednesday. I have received a letter from Mrs. Tabor asking if she will go to Monterey - she says she will go if If will pay her expenses. Now as she was intending to go to San Francisco, and as the excursion tickets are cheaper by way of San Jose, I do not think I shall agree to do so. If she wishes to go to San Francisco and attend to business, she may go at her own expense not mine. (T.S.R. 52. 2 P.M. 80. S.S. 63.)

June 27. Sabbath. I have had the asthma so oppressively that I have sent for Mrs. Tabor, to see if she can give me relief. It seemed to me I could hardly live through another night like last night. It seemed sometimes that I should have to stop breathing. I feel like one who has had a glimpse on to the other shore. Mrs. Tabor says I must change climate for awhile, or she fears I cannot live long. I begin to feel that it is not a matter of choice with me, whether or not I go - I must go - there is no alternative. And the sooner I can make arrangements the better. (T.S.R. 55. 2 P.M. 87. S.S. 73.)

June 28. Monday. Twentytwo years ago this morn. (and it was Mon. morn.) brother Elmer died. How the time has flown - a babe has become a man since then. Have received a postal

1880. from Ada, saying she shall not go to Monterey without me, as she should be lonesome. I forgot to say that Mabel Geffroy came up with Mrs. Tabor last night and returned with her this morn. The other girls have not come from Delano. (T.S.R. 50. 2 P.M. 85 S.S. 69.)

July 1. Thursday. Thinking to improve my health I rode again with Horace - this time to sheep camp, but the heat is so oppressive, I do not seem to feel much better. Received a letter from Ada, but she did not answer mine not having received it. (T.S.R. 55. 2 P.M. 92 S.S. 75.)

July 2. Friday. I rode again this morning, this time with Mr. Pascoe, and we went to see the new school house near Mr. Clements. It is indeed a very fine building-two stories high. I wish ours was as imposing in architecture. I have written to Luther. Mother called this afternoon. (T.S.R. 58. 2 P.M. 95 S.S. 78.)

July 4. Sabbath. I was too sick with asthma to go to meeting. Mr. Taft preached in Mr. Pascoe's place, as he went to Jenny Lind to Mr. Thomas Wiley's to marry his daughter Annie seventeen years old to John Harris. Mr. Pascoe took our Hannah with him. Susie called in on her way from the S. school and urged me to go and change climate for my health. I told her I feared I had waited so long that I was not able to leave. I have written to Ada to meet me next Tuesday at Lathrop and to go with me to Monterey, but I am too weak to try a climate of which I know nothing, and Dr. says I am too weak to go anywhere unless I can have Mrs. Tabor to go with me. So now he says I had better go to Lodi and see if she will go with me to Dutch Flat. She has before said she intended to go there