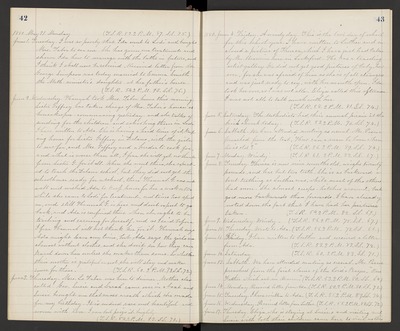 June 1. Tuesday. I was so poorly that Ida went to Lodi and brought Mrs. Tabor to see me. She has given me treatment and shown Ida how to manage with the baths in future, and I think I shall now be relieved. Received letter from Ada. George Simpson was today married to Emma Smith the Meth. minister's daughter - at her father's house. (T.S.R. 54. 2 P.M. 93 S.S. 76.)

June 2. Wednesday. Hannah took Mrs. Tabor home this morning. Sister Geffroy has taken charge of Mrs. Tabor's house as housekeeper - commencing yesterday - and she talks of sending for the children and schooling them in Lodi. I have written to Ada. She is having a hard time of it, keeping house for Sister Geffroy in Delano, with the girls to sew for, and Mr. Geffroy and a herder to cook for, and what is worse than all, I fear she will get no thanks from Sister G. for it all. When she went there, she expected to teach the Delano school, but they did not get the schoolhouse ready for a school, then Hannah G. was not well and wished Ada to keep house for her a week or two while she came to Lodi for treatment, and time has sped on, and still Hannah G. is here and don't expect to go back, and Ada is confined there when she ought to be teaching and earning for herself, and as I said before I fear Hannah will not thank her for it. Hannah says Ada might leave any time, but Ada says the girls are almost without clothes, and she don't see how they can travel down here unless she makes them some. So whether their mother is grateful or not, she will stay and make some for them. (T.S.R. 60. 2 P.M. 93 S.S. 72.)

June 3. Thursday. Mrs. Le Tabor was here to dinner. Mother also called. Geo. Susie and Sarah came over in a boat and Susie brought me that moss wreath which she made for my birthday. It is indeed rare and beautiful - and woven with love. I can but prize it highly. (T.S.R. 50. 2 P.M. 83 S.S. 70.)

1880. June 4. Friday. A windy day. This is the last day of school for this school year. I have written to Luther and enclosed a picture of Theresa, which I have just had taken by Mr. Brannin here in Lockeford. He has traveling artist gallery. We did not get good pictures of baby, however, for she was afraid of him as she is of all strangers and was just ready to cry, with her mouth open. Ida took her over, as I was not able. Eliza called this afternoon I was not able to talk much with her. (T.S.R. 58. 2 P.M. 81 S.S. 74.)

June 8. Tuesday. Theresa is now nine months old, weighs twenty pounds, and has but two teeth. She is as backward about teething as Luther was, while most of the others had more. She almost creeps - hitches around, but goes more backwards than forwards. I have already noted down the fact that I have had her pictures taken. (T.S.R. 54. 2 P.M. 82 S.S. 69.)

June 17. Thursday. Eliza, who is staying at Susie's and visiting and Susie with both their children came here to visit us this