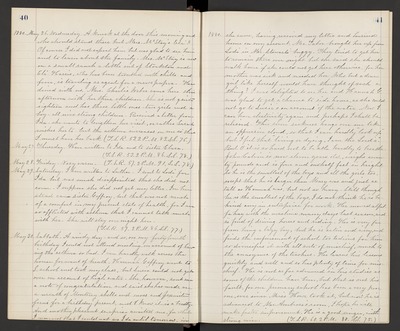 1880. May 26. Wednesday. A knock at the door this morning and who should stand there but Mrs. McStay's Eli? Of course I did not expect him but was glad to see him and to learn about the family. Mrs. McStay is now on a small ranch a little out of Stockton and Eli Harris, who has been troubled with chills and fever, is traveling as agent for a news paper. He dined with us. Mrs. Charlie Weber came here this afternoon with her three children. She is not quite eighteen and has three little ones - two girls and a boy - all nice strong children. Received a little from Ida - she wants to lengthen her visit, or rather Sarah wishes her to but the asthma increases on me so that I must have her back. (T.S.R. 53. 2 P.M. 83. S.S. 76.)

May 29. Saturday. I have written to Luther. I sent to Lodi for Ida but was much disappointed that she did not come. I suppose she did not get my letter. In her stead came sister Geffroy, but that was not much of a comfort in my present state of health, for I am so afflicted with asthma that I cannot talk much with her. She will stay over night here. (T.S.R. 59. 2 P.M. 86. S.S. 77.)

May 30. Sabbath. A windy day - and so, on my fortyfourth birthday I could not attend meeting on account of having the asthma so bad. I can hardly walk across the house for want of breath. Hannah Geffroy went to S. school and took my class, but Susie could not get over on account of high water. She however, send me a note of congratulation and said she has made me a wreath of Monterey shells and moss and Yosemite ferns for a birthday present, and I know it is a beauty. And another pleasant surprise awaited me, for while I murmured that I could not see Ida until tomorrow, in

1880. she came, having received my letter and hurried home on my account. Mr. Tabor brought her up from Lodi in Mr. Stewarts buggy. They tried to get her to remain there over night but she said should walk home if she could not get here otherwise, for her mother was sick and needed her. Who but a dear girl like herself would have thought of such a thing? I was delighted to see her and Hannah G. was glad to get a chance to ride home, as she could not go to Susie's on account of the water. Now I can have electricity again, and perhaps I shall be relieved. This severe sickness hangs over me like an opressive cloud, so that I can hardly "look up" but I feel that "living or dying, I am the Lord's." But O it is so hard not to be able hardly to breathe. John Calvin is now eleven years old, weighs seventy pounds and is four and one-half feet in height. So he is the smallest of the boys and all the girls too, except that he is larger than Mary was and just as tall as Hannah was, but not so heavy. Still though he is the smallest of the boys, I do not think he is behind any in enterprise for work. He moved alfalfa hay with the machine many days last season, and is fond of driving horses and riding. He is very far from being a lazy boy, but he is active and wiry, and finds the confinement of school too tedious for him so diversifies it with all sorts of mischief, much to the annoyance of the teachers. He learns his lessons quickly and well and so has plenty of time for mischief. He is not as far advanced in his studies as some of the children have been, but that is not his fault, for our primary school has been a very poor one, ever since Miss Howe took it, but now he is advanced to Mr.Ambrose's room, I hope he will make faster improvement. He is a good singer, with strong voice. (T.S.R. 60. 2 P.M. 80. S.S. 75.)