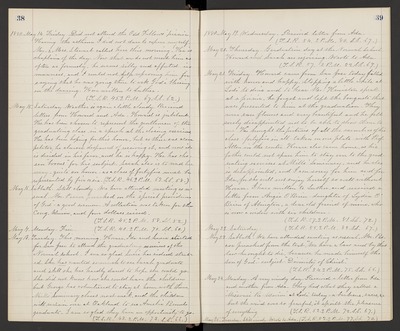 1880. May 14. Friday. Did not attend the Old Fellows' picnic. Having the asthma I did not dare to expose myself. Mr. & Mrs. Stewart called here this morning. He is chaplain of the day. Now that we do not meet him as often as formerly, he seems silly and affected in manners, and I could not help reproving him for saying that he was going there to ask God's blessing on the dancing. Have written to Luther. (T.S.R. 45. 2 P.M. 67. S.S. 62.)

May 15. Saturday. Weather is again a little cloudy. Received letters from Howard and Ada. Howard is jubilant. He has been chosen to represent the gentlemen of the graduating class in a speech at the closing exercises. He has been hoping for this honor, but as there was a competitor he almost despaired of receiving it, and now it is decided in his favor, and he is happy. He has chosen "booms" for his subject. Sarah also is to read her essay - quite an honor - as a class of fortyfive must be represented by five or six . (T.S.R. 46. 2 P.M. 63. S.S. 58.)

May 18. Tuesday. This morning, Horace, Ida and Susie started for San Jose to attend the graduating exercises of the Normal School. I am glad Susie has indeed started. She has wanted so much to see Sarah graduate and still she has hardly dared to hope she could go. She did not know how she could leave the children but George has volunteered to stay at home with them. Mill's Seminary closes next week, and the children will remain over at Oakland to see Amelia Bruml graduate. I am so glad they have an opportunity to go. (T.S.R. 48. 2 P.M. 73. S.S. 66.)

May 21. Friday. Howard came from San Jose today filled with honor and happy. Stopping a little while at Lodi to dine and to hear Mr. Keniston speak at a picnic, he forgot and left she bouquets that were presented to him at the graduation. They were rose flowers and very beautiful and he felt sorely disappointed not to able to show them to me. He brought the pictures of all the members of his class - fortyfive in all - taken on one plate with Prof. Allen in the center Horace also came home, as his father could not spare him to stay over to the graduating exercises at Mills' Seminary, and he also is disappointed, and I am sorry for him and for Ida, for she will not enjoy herself so well without Horace. I have written to Luther, and received a letter from Angie O'Brien - daughter of Lydia O'Brien of Abington, a dear old friend of mine, who is now a widow with six children. (T.S.R. 57. 2 P.M. 81. S.S. 72.)