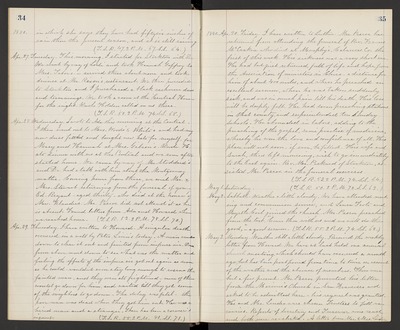 Apr. 27. Tuesday. This morning. I started for Stockton with Dr. We went by way of Lodi and took Hannah Geffroy to Mrs. Tabor's. - arrived there about noon and took dinner at Mr. Rexon's restaurant. We then proceeded to Stockton and I purchased a black cashmere dress and trimmings. We took a room at the Central House for the night. Uncle Holden called on us there. (T.S.R. 50. 2 P.M. 74. S.S. 68.)

Apr. 28. Wednesday. I wrote to Ada this morning at the Central. I then went out to Mrs. Wood's & White's and had my new dress fitted and bought new hats for myself, for Mary and Hannah at Mrs. Gibson's. Uncle H. ate dinner with us at the Central and we soon after started home. We came by way of Mr. Staddard's and Dr. had a talk with him about the Montgomery matter. Coming home from there, we met Mr. & Mrs. Stewart returning from the funeral of young Ed. Bryant - aged thirty - who died at the house of Mr. Filanders. Mr. Pascoe did not attend it as he is absent. Found letters from Ada and Howard when we reached home. (T.S.R. 52. 2 P.M. 78. S.S. 70.)

Apr. 29. Thursday. I have written to Howard. A singular death occurred in a well by Peter Linn's today. A man went down to clear it out and fainted from impure air. One from above went down to see what was the matter and feeling the effects of the impure air got out again as soon as he could - wouldn't even stay long enough to rescue the fainted man, and they were all frightened - none of them would go down for him, and waited till they got some of the neighbors to go down. The delay was fatal - the poor man was dead when they got him out. He was a hired man and a stranger. There has been a coroner's inquest. (T.S.R. 55. 2 P.M. 81. S.S. 71.)

1880. Apr. 30. Friday. I have written to Luther. Mr. Pascoe has returned from attending the funeral of Rev. Francis M'Craken who died at Murphy's Calaveras Co. the first of this week. His sickness was a very short one. He had but just returned, full of life and hope, from the Association of ministers in Chico - a distance for him of about 400 miles, and where he preached an excellent sermon, when he was taken suddenly sick, and was in much pain till his death. His loss will be deeply felt. He had seven preaching stations in that county, and superintendent ten Sunday Schools. He abounded in labors, adding to the preaching of the gospel, some practise of medicine, whereby he won the love and confidence of all. His place will not soon, if ever, be filled. His wife and Sarah, thus left mourning, wish to go immediately to the East again. Rev. Mr. Packard of Stockton, assisted Mr. Pascoe in the funeral exercises (T.S.R. 53. 2 P.M. 74. S.S. 64.)

May 2. Sabbath. Weather a little cloudy. We have attended meeting and communion service, and Laura Foote and Myrtle Coil joined the church. Mr. Pascoe preached from the text, "Come thou with us and we will do thee good," - a good sermon. (T.S.R. 55. 2 P.M. 74. S.S. 62.)

May 3. Monday. Weather still a little cloudy. Received the weekly letter from Howard. We have at last held our annual church meeting, which should have occurred a month ago, but has been postponed from time to time on account of the weather and the absence of members. There were but a few present. Mr. Pascoe presented his letter from the Mariner's Church in San Francisco and asked to be admitted here - his request was granted. He and Mr. Lander were chosen Trustees to fill vacancies. Reports of Secretary and Treasurer were reach and both were re-elected. A letter from Mr. & Mrs. Lander