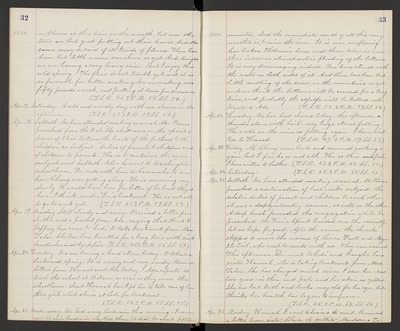 1880. in blooms at this time in the month, but now the trees are but just putting out their leaves. And the same may be said of all kinds of flowers. There has been but little warm sunshine as yet. And tonight we are having a very heavy rain. But I enjoy this cold spring. The flies do not trouble yet, and it is so favorable for butter-making. We are making over fifty pounds a week, and putting it down for summer. (T.S.R. 46. 2 P.M. 56. S.S. 50.)

Apr. 18. Sabbath. We have attended meeting as usual. Mr. Pascoe preached from the text, "He shall come in the spirit & power of Elias to turn the hearts of the fathers to the children", &.c. Subject "duties of parents to children and of children to parents. He is to continue the same subject next Sabbath. When he went to Washington school house. Dr. rode with him to Camanche to see how Chang was getting along. He is recovering very slowly. It would have been far better if he had stayed here, I think, under Dr.'s treatment. He is not able to go to work yet. (T.S.R. 41. 2 P.M. 59. S.S. 52.)

Apr. 19. Monday. Still cloudy and rainy. Received a letter from Luther and a postal from Ada, saying that Aunt H. Geffroy has come to Lodi to take treatment from Mrs. Tabor. She has been troubled for a long time with sick headaches and dyspepsia. (T.S.R. 45. 2 P.M. 56. S.S. 57.)

Apr. 20. Tuesday. We are having a hard storm today. O what a backward spring. It is rainy and very windy. Received letters from Howard and Ada today. Ada expects to teach the school at Delano, as soon as they move the schoolhouse. Aunt Hannah has left her to take care of her three girls which she is at Lodi for treatment. (T.S.R. 50. 2 P.M. 55. S.S. 55.)

Apr. 21. Wednesday. We had a very hard rain this morning - I never saw it rain harder in my life than it did for about fifteen

1880. minutes. And the immediate result of all this rainy weather is to raise the river. It is now overflowing has broken Holman's lever and those below us, and there is now an almost entire flooding of the bottoms. It is very discouraging indeed. Our lever stands with the water on both sides of it. And there has been but little melting of the snow in the mountains as yet and we think the bottoms will be covered for a long time, and probably the alfalfa will be killed out. Wrote to Ada. (T.S.R. 53. 2 P.M. 59. S.S. 52.)

Apr. 25. Sabbath. We have attended meeting as usual. Mr. Pascoe preached - a continuation of last week's subject - the relation duties of parents and children to each other - it was a deeply interesting sermon, as well as the other. A deep hush pervaded the congregations while he preached the Divine Spirit brooded over the assembly, let us hope for good. After the service, the church stopped to receive the names of Laura Foote and Myrtle Coil, who wish to unite with us. They were received. This afternoon, Dr. went to Lodi and brought here sister Hannah, who is taking treatment from Mrs. Tabor. She has changed much since I saw her - now two years - is thin and pale and her skin is yellow. She has lost teeth and looks very old for her age, but thinks her health has begun to improve. (T.S.R. 45. 2 P.M. 68. S.S. 60.)