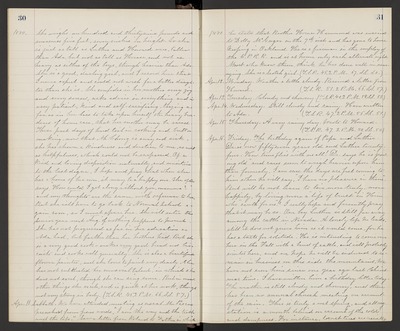 1880. She weighs one hundred and thirtynine pounds and measures five feet, seven inches in height. So she is just as tall as Luther and Howard were, taller than Ada, but not as tall as Horace and not as heavy as either of the boys, though heavier than Ada. She is a good, dashing girl, and I record here that I never expect and could not wish for a better daughter than she is. She confides in her mother every joy and every sorrow, asks advice in everything and is very patient, kind and self-sacrificing, trying as far as in her lies to take upon herself the heavy burdens of home care, that her mother may be eased. These past days of hard toil in cooking and butter making, now that Ah Chang is away and sick, she has shown a kindness and devotion to me, as well as helpfulness, which could not be surpassed. Of a kind and loving disposition naturally, and sensitive to the last degree, I hope and pray that when she has a home of her own, it may be a happy one. She often says, "How could I get along without you, mamma?" and my thoughts are the same with reference to her. But she will have to go back to Normal School again soon, so I must spare her. She will enter the Senior year next Aug. if nothing happens to [?]. She has not progressed as far in her education as Ada had, but farther than her brothers had. But she is a very good cook - makes very good bread and biscuits and cooks well generally. She is also a beautiful flower painter, and she loves to paint very dearly. She has not cultivated her musical talent, in which she does not excel, though she can sing some. But in most other things she excels, and is quick at her work, though not very strong in body. (T.S.R. 45. 2 P.M. 66. S.S. 57.)

Apr. 11. Sabbath. We have attended meeting as usual. Mr. Pascoe preached from Jesus words, "I am the way and the truth and the life." Saw a letter from Roland to Father in which

Apr. 16. Friday. The birthday again of Papa and Luther. Dr. is now fifty seven years old and Luther twentyfour. How time flies with us all! Dr. says he is "growing old" and cares seem to weigh heavier upon him than formerly. I am sure the days are fast coming to him when he will say, "I have no pleasure in them." But will he not learn to love more truly, more happily, by living more a "life of trust" in Him who "careth for us". I really hope and fervently pray that it may be so. Our boy Luther is still far away among the cattle in Nevada. A lonely life he leads, still it does not grieve him as it would some, for he has a taste for solitude. He is intending to come over here in the Fall with a band of cattle, and will probably winter here, and we hope he will be induced to remain in business on this side the mountains. We have not seen him since one year ago last Christmas time. I have written him a birthday letter today. The weather is still cloudy and showery, and there has been no annual church meeting on account of the rain. This is truly a well spring, and all vegetation is a month behind on account of the cold and dampness. For instance, locust trees are usually