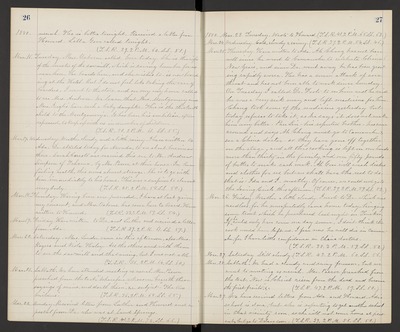 Mar. 16. Tuesday. Mrs. Osborne called here today. She is the wife of the master of the sawmill, which is sawing lumber for us near here. He boards here, and she wishes to - is now boarding at the Hotel. But I do not feel like taking the care of boarders. I went to the store and on my way home called to see. Mr. Ambrose. We learn that Mrs. Montgomery and Mrs. Inglis have each a baby daughter. This is the thirteenth child to the Montgomery's. It has been his ambition, often expressed, to keep up with us in number of children. (T.S.R. 30. 2 P.M. 61. S.S. 55.)

Mar. 17. Wednesday. Weather cloudy and a little rainy. I have written to Ada. Dr. started today for Nevada, to see about business there. Sarah Carroll was married this eve to Mr. Andrew Simpson of Tehama, by Mr. Pascoe, at their house. In her failing health, this seems almost strange. She is to go with him immediaty to his home. This was a surprise to almost everybody. (T.S.R. 45. 2 P.M. 58. S.S. 50.)

Mar. 25. Thursday. Have written to Ada. Ah Chang has not been well since he went to Camanche to celebrate China New Years', and since Dr. went away he has been growing rapidly worse. He has a severe attack of sore throat and has not been able to work since Sunday. On Tuesday, I called Dr. Foote to see him and he said he was a very sick man and and left medicine for him. Chang took some of the medicine yesterday but today refuses to take it, as he says it does not make him any better. Pan Lin - his reputed brother - has come around and says Ah Chang must go to Camanche & see a China doctor - so they have gone off together on the stage, and all this cooking is left on our hands more than thirty in the family, and over fifty pounds of butter to make each week. Ah Gon will wash dishes and clothes for us, but we shall have the rest to do. that is - Ida and I - mostly. Of course, we could not go to the Sewing Circle this afternoon. (T.S.R. 39. 2 P.M. 59. S.S. 52.)

Mar. 26. Friday. Weather a little cloudy. I wrote to Dr. which was needless, for he unexpectedly came home today, bringing some trout which he purchased last night in Truckee. If he could only have come one day sooner, I don't think the cook would have left us. I fear now he will die in Camanche for I have little confidence in China doctors. (T.S.R. 38. 2 P.M. 59. S.S. 52.)