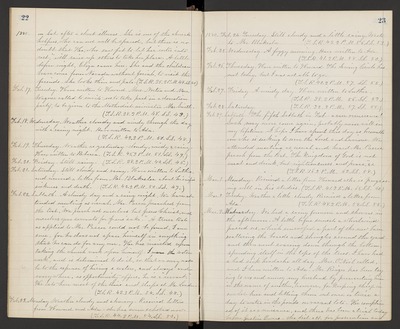 1880. on Sat. after a short illness. She is one of the church helpers, who cannot well be spared, but there is no doubt that He who saw fit to let her "enter into rest", will raise up others to take her place. A little before night, Eliza came here. She and the children have come from Nevada without Josiah, to visit the friends. She looks thin and pale. (T.S.R. 35. 2 P.M. 48. S.S. 45.)

Feb. 22. Sabbath. A cloudy day and a rainy night. We have attended meeting as usual. Mr. Pascoe preached from the text, "We preach not ourselves but Jesus Christ, and ourselves your servants for Jesus' sake." A truer text as applied to Mr. Pascoe could not be found, I am sure, for he does not spare himself in anything that he can do for any one. He has insisted upon taking the church work upon himself. I mean the sexton work, and is determined to do it, so that we may not be to the expense of hiring a sexton, and always and everywhere, as opportunity offers, he is a "servant." He eats here most of the time and sleeps at Mr. Lander's. (T.S.R. 43. 2 P.M. 54 S.S. 48.)

Feb. 29. Sabbath. The fifth Sabbath in Feb. - a rare occurrence! Such may never come again, probably never will in my lifetime. I hope I have spent this day as becometh one who is seeking to serve the Lord and Saviour. We attended meeting as usual and heard Mr. Pascoe preach from the text, "The kingdom of God is not meal and drink, but righteousness and peace," &.c. (T.S.R. 36. 2 P.M. 62. S.S. 58.)

Mar. 3. Wednesday. We had a rainy forenoon and showers in the afternoon. A little before sunset a whirlwind passed us, which unroofed a part of the new barn scattering the boards and shingles around the yard and then went roaring down through the bottom, spending itself in the tops of the trees. I have had a bad sick headache all day. Mrs. O'Neil called, and I have written to Ada. Mr. Ringer has been trying to vex and annoy my husband by prosecuting him in the name of another, however, for keeping sheep in our lot here and letting them out once or twice a day to water in the ponds on vacant lots. He complained of it as a nuisance, and there has been a trial today before Justice Owens - the dist. atty. for the prosecution and