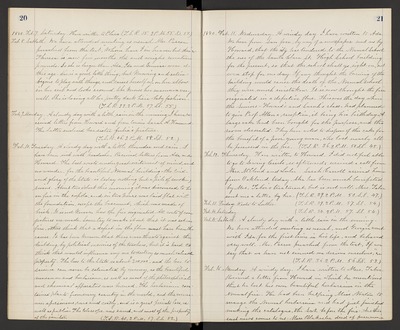 Feb. 8. Sabbath. We have attended meeting as usual. Mr. Pascoe preached from the text, "Whom have I in heaven but thee." &c Theresa is now five months old and weighs seventeen pounds. So she is larger than Ada, Ida and Eunice were at this age. She is a good little thing, but knowing and active - begins to play with things, and raises herself up on her elbow in her crib and looks around. She knows her mamma very well. She is losing all her pretty dark hair - baby fashion. (T.S.R. 33. 2 P.M. 57. S.S. 55.)

Feb. 10. Tuesday. A cloudy day with a little thunder and rain. I have been sick with headache. Received letters from Ada and Howard. The last wrote under great excitement of mind, and no wonder, for the beautiful Normal building the pride and glory of the State - is today nothing but a pile of smoking ruins. About two o'clock this morning it was discovered to be on fire in the cupola, and in two hours was laid flat with the foundation, except the basement, which was made of brick. It is not known how the fire originated. All sorts of conjectures are made. Some try to make it out that it was set on fire, others think that a defect in the flue must have been the cause. It has been known that there were threats against the building, by political enemies of the teachers, but it is hard to think that would influence any one to destroy so much valuable property. The loss to the State is about $300,000, and the loss to science can never be estimated by money, as the beautiful museum and herbarium, as well as most of the philosophical and chemical apparatus were burned. The herbarium contained plants from every country in the world, and the museum specimens rare and costly, and is a great private loss, as well as public. The telescope was saved, and most of the property of the janitor. (T.S.R. 40. 2 P.M. 57. S.S. 52.)

1880. Feb. 11. Wednesday. A windy day. I have written to Ada. We hear from San Jose, by way of a newspaper sent us by Howard, that the city has tendered to the Normal School the use of the Santa Clara St. High School building for the present, so that the school shall go right on, not even stop for one day. If any thought the burning of the building would cause the death of the Normal school they were much mistaken. It is now thought the fire originated in a defective flue. This was the day when the Seniors - Howard's and Sarah's class, had planned to give Prof. Allen a reception, it being his birthday. A large cake had been bought for the purpose, and the room decorated. They have voted to dispose of the cake for the benefit of a poor young man, who lost nearly all he possessed in the fire. (T.S.R. 36. 2 P.M. 50. S.S. 45.)

Feb. 12. Thursday. Have written to Howard. I did not feel able to go to Sewing Circle, so afterwards received a call from Mrs. McCloud and Lulu. Sarah Carroll arrived home from Oakland today. She has been much benefited by Mrs. Tabor's treatment, but is not well. Mrs. Tabor sent me a letter by her. (T.S.R. 29. 2 P.M. 50. S.S. 47.)

Feb. 16. Monday. A windy day. I have written to Mrs. Tabor. Received a letter from Howard in which he mentions that he lost his own beautiful herbarium in the Normal fire. He had been helping Miss Norton to arrange the Normal herbarium and had just finished making the catalogue, the Sat. before the fire. Another sad news comes to us. Mrs. Blakeslee died of pneumonia