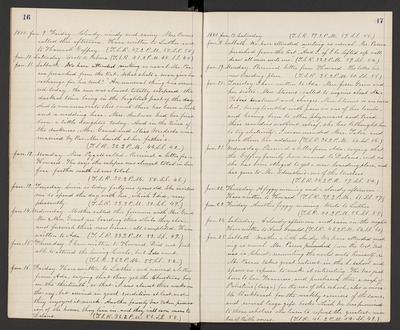 Jan. 11. Sabbath. We have attended meeting as usual. Mr. Pascoe preached from the text, "What shall a man give in exchange for his soul?" An unusual thing has occurred today - the sun was almost totally eclipsed - the darkest time being in the brightest part of the day. And to commemorate this event there has been a birth and a wedding here. Mrs. Ambrose had her first born - a little daughter today. And in the time of the darkness, Ms. Grant and Miss Wardrobe were married by Rev. Mr. Smith at her father's. (T.S.R. 32. 2 P.M. 44 S.S. 42.)

Jan. 16. Friday. Have written to Luther, and received a letter from Ada, saying that they got the Christmas box on the thirteenth, so thus it was almost three weeks on the way, but arrived in good condition at last, and they enjoyed it much. Another family has taken possession of the house they live in, and they will soon move to Delano. (T.S.R. 36. 2 P.M. 56. S.S. 53.)

Jan. 20. Tuesday. I have written to Ada. Mrs. Jesse Green and her sister - Mrs. Stevens - called to inquire about Ms. Tabor's treatment and charges. Mrs. Stevens is an invalid, being troubled with pain in one of her limbs, and having been to other physicians and tried their remedies without relief, she has bethought her to try electricity. I recommended Mrs. Tabor and gave them her address. (T.S.R. 36. 2 P.M. 60. S.S. 56.)

Jan. 25. Sabbath. Weather a little cloudy. We have attended meeting as usual. Mr. Pascoe preached from the text, "God was in Christ, reconciling the world unto himself", &.c. Mr. Pascoe takes great interest in the S. school and spares no expense to make it interesting. He has just been to San Francisco and purchased there a map of Palestine (large) for the use of the school, also a movable blackboard for the weekly exercises of the same, and several large gift books which he has promised to those scholars who learn to repeat the greatest number of Bible verses. (T.S.R. 46. 2 P.M. 54. S.S. 49.)