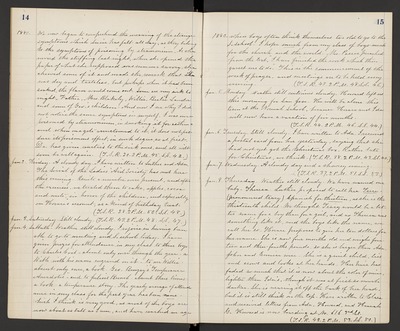 1880. We now began to comprehend the meaning of the strange symptoms which Susie has felt all day, as they belong to the symptoms of poisoning by stramonium. As she mixed the stuffing last night, when she opened the paper of what she supposed was summer savory, she chewed some of it and made the remark [?] it was dry and tasteless, but perhaps when it had been soaked, the flavor would come out. Some are very sick tonight. Father, Mrs. Blakely, Willie, Bertie Lander and some of Geo's children. And now I see why I did not notice the same symptoms in myself. I was once poisoned by stramonium in smoking it for asthma and when one gets accustomed to it, it does not produce its poisonous effect, in such degree, as at first. Dr. has given emetics to the sick ones, and all will soon be well again. (T.S.R. 30. 2 P.M. 45 S.S. 42.)

Jan 2. Friday. A cloudy day. I have written to Luther and Ada. The Social of the Ladies Aid Society has met here this evening. [?] a number were present, and after the exercises, we treated them to cake, apples, cocoa, and nuts, in honor of the children, and especially on Horace's account, as a kind of birthday treat. (T.S.R. 38. 2 P.M. 50. S.S. 48.)

Jan. 4. Sabbath. Weather still cloudy. I rejoice in having been able to go to meeting and S. school today. I have given prizes for attendance in my class to three boys to Charles Coil - absent only once through the year - a Bible with his name engraved on it - to our Willie - absent only once, a book Geo. Bungays's "Temperance Anecdotes" - and to Julius Buml - absent three times a book - a temperance story. The yearly average of attendance once in my class for the past year has been nine - which I think is very good, as most of the boys are now about as tall as I am, need have reached an age

1880. when boys often think themselves too old to go to the S. School. I hope much from my class of boys-much for the church and the world. Mr. Pascoe preached from the text, "I have finished the work which thou gavest me to do". This is the commencement of the week of prayer, and meetings are to be held every evening. (T.S.R. 43. 2 P.M. 48. S.S. 46.)

Jan. 5. Monday. Weather still continues cloudy. Howard left us this morning for San Jose. He will be alone this term at the Normal School, because Horace and Ida will now have a vacation of five months. (T.S.R. 44. 2 P.M. 46. S.S. 44.)

Jan. 8. Thursday. Weather still cloudy. We have named our baby - Theresa. Luther proposed to call her Trece - (pronounced tracy) Spanish for thirteen, as she is the thirteenth child. We thought Tracy would be a better name for a boy than for a girl, and as Theresa was something like it, and the boys like the name, we call her so. Horace proposes to give her ten dollars for her name. She is now four months old and weighs fourteen and three-fourths pounds. So she is larger than Ada, John and Eunice were. She is a quick child, lies and crows and looks at her hands. Her hair has faded so much that it is now about the color of mine, lighter than Ida's, though it was at first so much darker. She is wearing it off the back of her head, but it is still thick on the top. Have written to Clara and received letters from Ada, Howard, and Hannah G. Howard is now boarding at No. 616 3rd St. (T.S.R. 42. 2 P.M. 53. S.S. 50.)