Mia Saucedo, University of the Pacific 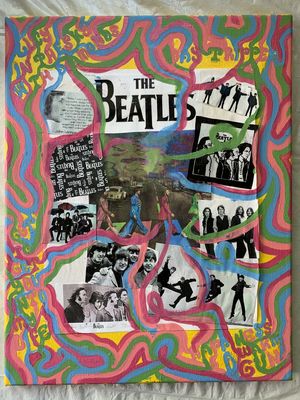 The original framed collage was a birthday present when I was a huge Beatles fan in the sixth grade.

I decided to use this collage to contrast how I viewed the Beatles and how I consumed their music when I was younger and how that's evolved, as well as how their sound evolved as their career progressed.

I focused on how their songs began to be influenced by their drug use. Some of their songs with drug-influenced lyrics are featured in the painting.

To view image in full-size mode, toggle the button on bottom right of the embedded image viewer.